Oinoe, site Ag. Athanasios, Municipality of Ilida.  Z. Leventoudi (Z’ EPKA) reports on the rescue excavation conducted during June 2014 in the Ag. Athanasios site. This excavation revealed part of a cemetery, containing Late Classical pithos burials (Fig. 1a-b). This cemetery was revealed during the process of configuration of P. Alexopoulos’ farm. The continuous tilling during the past years had destroyed the majority of the cemetery.

The survey was confined in the SW side of the farm, where the pithos burials were discovered. From the entirety of the field, the excavators gathered black-painted and unpainted sherds from various vessel types, parts of pithoi rims and parts of tiles for tile-roof burials. There are some indications for the expansion of the cemetery to the nearby farms.

The excavation revealed, not very deep below surface (c. 20cm), two pithos burials. The cemetery wasn’t characterized by precise spatial organization, the distances between the pithos burials were random. The soil where they were placed was sand-like, which is a usual characteristic of jar-burial cemeteries in Ileia.

The pithos burial no. 1 (E-W) was placed in a glancing way, and the nozzle, sealed with coarse sandstone, was higher than the base. A clay pyxis was placed in the NE side of the rim, serving as grave good. Inside, the pithos was empty.

The nozzle of the pithos burial no. 2 was facing towards the W and the pithos was placed on top of irregularly shaped sandstones. The remaining parts of the pithos revealed that it was large, and inside it there was a black painted olpe (primary oinochoe type). The little pottery found in the cemetery resembles pottery from local Ileia workshops, especially from the nearby ancient Ilida (Fig. 2a-b). 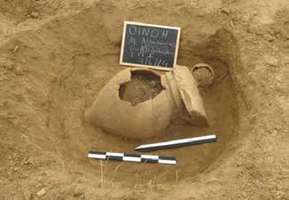 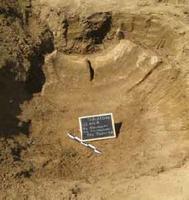 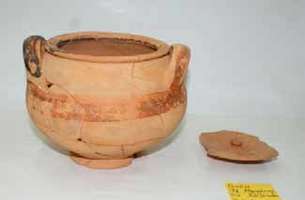 Fig. 3/ Pottery from the pithos burials 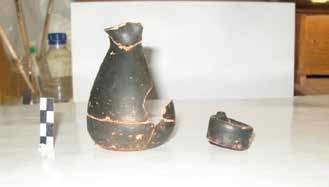 Fig. 4/ Pottery from the pithos burials