Tekes (Property of M. Kouloumbis), Heraklion. Maria Mavraki Balanou  (ΚΓ’ ΕΠΚΑ) reports that a deposit of archaeological material was investigated in this property, which is located in Tekes neighbourhood of Heraklion, in the broader area of Knossos. It comprised of two semi-circular successive carvings on the natural rock (orientation: NE-W) (Fig. 1,2). The carvings were filled and covered with calcareous soil as well as medium-sized crude stones and a large amount of pottery sherds. This was potentially destroyed building material and vessels from a building of funerary use dating to the Archaic period, as well as remains of the Ottoman period. Two boxes of pottery sherds, mainly of the Archaic but also of later periods (Ottoman) were collected, along with a lithic object, a loom weight and very few bones. 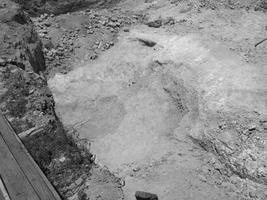