Siryon, positions 17+034 – 17+048, Ancient Sikyon. Konstansinos Kissas (LZ’ EPKA) reports on the continuation of the excavations in Siryon, a part of Ancient Sikyon, where part of the Classical urban settlement was previously unearthed.

Excavations continued in the third and fourth urban squares. The walls were formed using rubble masonry or stone plinths. The northern part of the third urban block (Fig. 1) underwent two constructional phases, consisting of repairs and sometimes, construction of new walls. This is evident due to architectural remains and small finds. Room XXVII was considered to be mostly of domestic use and a narrow-bottomed pithos covered with tiles was discovered in situ, while room XXVIII (Fig. 2) was much more carefully constructed (white coloured plastered walls, square plan) and, thus, was identified as an andron (men’s apartment), fit for seven anaklintra (chaises longues). Furthermore, a hoard of bronze coins was revealed alongside the S side of the N wall.  If room XXVIII is accurately identified, room XXX (which also bore white plastered walls) could be room’s XXVIII vestibulum (entrance hall).

Underneath the Classical levels, a Geometric cemetery was revealed. Two graves were unearthed: one of them (Τφ. 166) was a monumental grave formed of natural rock (Fig. 3) and the other was a covered larnax.

Grave no. 166 (SW-NE), composed of the sepulchral chamber (W) and the burial chamber (E) bore no signs of coverage. The burial chamber contained two contemporaneous adult burials (flexed position). The conservation of the human remains, as well as some burnt remains from inside the chamber indicate to the existence of a wooden stretcher or a wooden sepulchral container. The upper levels of the grave revealed the signs of the grave: a column krater (Fig. 4), which indicated that the S skeleton was of a male burial, and an amphora (Fig. 5) which indicated that the N skeleton was of a female burial. The krater seemed to have served also as a ritual vessel, as it contained 10 skyphoi, one oinochoe, and one kalathos. The burial signs are dated during the Middle Geometric II (first half of 8th century BC), and the burial is exceptionally rich in goods; there were 91 grave goods, mostly pottery (skyphoi, oinochoai, pyxis, spoons, kalathoi, amphorai, kyathoi, bottles, plates, kraters etc.). Apart from the large numbers of the small finds, they were also of high quality. The most impressive findings (as shown Fig. 6) are two pomegranate-shaped spherical vessels without handles, one double vessel and one bird-shaped vessel, as well as two bronze pins, placed on each side of the bodies (possibly ritual use).

Larnax no. 167 did not contain human remains, but the grave goods indicate a female burial (two snake-shaped bronze earrings, one bronze and two iron pins, and three beads). The placement of these items show that the body was laid out facing E. Some items were also discovered E of the burial trench (assemblage of 16 vessels – skyphoi, trifle-shaped oinochoai, hydriai), most of which are placed on top of the others. 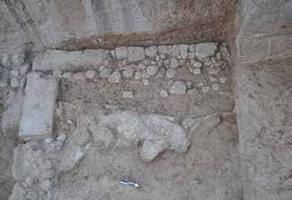 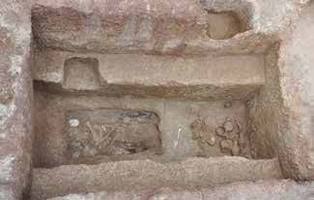