Athens - Corinth highway (‘Olympia Odos’), position 1+043 (Northern Part) and 1+560-1+625, Ancient Corinth. Konstantinos Kissas (LZ’ EPKA) reports on the continuation of the excavations that took place during the construction of the highway.

Initially, the northern part of the site at kilometric position 1+043 was excavated (Fig. 1). The upper levels revealed a well, formed within the natural rock and about 3 meters deep. By the well a ceramic drainpipe lined with hydraulic plaster was discovered, and, according to some pottery sherds found at the same level, both the drainpipe and the well were dated to the Late Roman-Early Byzantine era. Below it, a complex of walls and constructions was unearthed (Fig. 1).

Its S/SE section consists of a room formed in the S and the W by opus quadratum tufa walls (Fig. 2), while its N and E walls were formed of natural rock (Fig. 2). A destruction level containing mosaic floors, architectural members covered in plaster and late Classical-early Hellenistic pottery sherds was found in the S area. A smaller space with a stone bench on the E side was added during the building’s later phases. N of the room, a 2 metre tall stone pillar with a capital was discovered. The NW area of the trench revealed a complex of rooms (Fig. 4) of unknown use. N of the well, room A was unearthed. Its Π shaped elevated floors (N, W, S) led to it being identified as an andron (men’s apartment). It was equipped with a gutter connected to a drainpipe below the floor and its walls were decorated with red plaster.

In the W, room B, connected with room A was decorated with mosaic floor and yellow coloured plastered walls. The best conserved space was W of room A, room D (Fig. 5). It was a cellar building, its entrance was sealed in a later phase, and it was equipped with 3 large basins, while all of the room’s surfaces were covered with hydraulic plaster of excellent quality. The entire complex was dated during the 4th century B.C.

In the space between kilometric positions 1+560 and 1+625 there was a small complex of walls in the middle of part of a cemetery, containing 51 graves. Amongst them, the excavations revealed one arched chamber grave (Fig. 6), pit graves, many tiled roof graves, jar burials, child larnax burials and larnax graves. Many of them contained coins, pottery (oinochoai and ampullae). Most of those buried were laid out in an extended position. The graves are dated between the Archaic and Roman times. 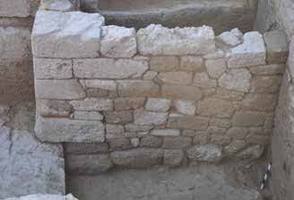 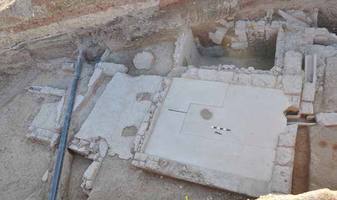 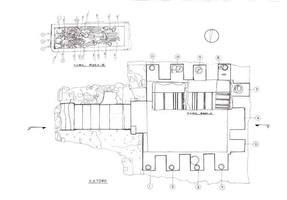