Toponym
Voutianoi
Linked Record
20142014 (1)2014 (2)2014 (3)2014 (4)2014 (5)2014 (6)
Report
Geladari, Corinth - Tripoli - Kalamata Highway, Lektro - Sparta section. Evangelia Pantou, Evangelia P. Eleutheriou and Maria Florou (5η EBA) report on discoveries made during the construction of the new motorway.
A building complex of the early Byzantine period was found, oriented EW (Fig. 1). Small finds from the building were from the late fifth and early sixth centuries AD. At this site there was construction phase was at the beginning of the sixth century, consisting of a rectangular building oriented NES (17 x 11.50m). The inner walls were coated in plaster. A Christian grave was found to the E of the building.
In the mid sixth century, there were additions made to the building, including extensions to the N and E, with more rooms added to the W. This brought the overall size of the structure to 32 x 22m. In the SW part of the building, a rectangular well was found built into the floor, and also two storage pits. A ceramic kiln was found in the NE, which cut a wall of an earlier phase. Unpainted ceramics of the sixth century were found, and also a bronze coin. There were a few finds of the late Classical and early Hellenistic period also found. 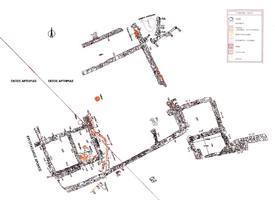