Toponym
Karavas
Linked Record
2014
Report
Karava, Corinth - Tripoli - Kalamata Highway, Lektro - Sparta section. Evangelia Pantou, Evangelia P. Eleutheriou and Maria Florou (5η EBA) report on discoveries made during the construction of the new motorway.
Foundations were found of a building 3.48 x 5.04m, with walls surviving to a height of 0.35m. Inside the room, many pottery sherds were found, a coin, and an iron nail. A large storage vessel was found to the N of the room, along with five broken vessels. It is thought that the building was a storage facility dated to the early Byzantine period.
At point Χ.Θ. 41+480-41+520, another building was found with dimensions 4.20 x 3.67m, with a maximum surviving height 0.35m. A damaged brick floor was found, and a grave just outside.
S/SW of the two structures described above, two more walls were revealed, made of mudstone with a mortar binder. Between these walls was a mosaic floor, with dimensions 2.10 x 1.60m, decorated with a geometric pattern. The mosaic is dated to the end of the fifth century AD. Small finds (pottery sherds, four coins, and some glass fragments) were too few to date. 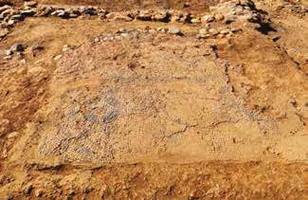