Olynthos. Bettina Tsigarida (Ephorate of Antiquities of Pella), Zosia Archibald (Liverpool/BSA), and Lisa Nevett (Michigan/BSA) report on the fourth season of this collaborative project which aims to recover a uniquely detailed picture of Greek households as social and economic units, within their broader neighbourhood, urban and regional settings (Fig. 1).

On the North Hill the team continued to investigate house B ix 6, working towards its complete excavation by the end of the 2018 season and to explore settlement organisation and the distribution of activities across the hill. Continued excavation of house B ix 6 (Fig. 2) showed that its poorly preserved southeast corner had two occupation phases, the later consisting of a cobbled floor surface close to the eastern boundary wall with a pebble and gravel floor or subfloor matrix. Beneath lay a destruction deposit characterised by tiles lying flat. The central section of the pastás and its boundary with the courtyard were revealed including two cut-stone bases on which wooden columns or posts probably rested to support the roof. One of these may have been incorporated into a north-south wall which appears to have divided the pastás.

On the South Hill, further electrical resistance survey suggested that the urban grid identified in 2016 continued across almost the whole of the surveyable part of the hill with the exception of its extreme south (Fig. 3). Further survey of a limited portion of the southern part of the hill with ground penetrating radar suggests that in that area, at least, anomalies apparently representing road surfaces can be detected in the earliest cultural levels, at a possible depth of up to 1.5m. Magnetic and electromagnetic survey outside the fenced archaeological site, to the east of the South Hill, suggested that settlement here was much less dense than on the two hills, and does not appear to follow the kind of grid envisaged by Robinson.

Three new 4 x 4m trenches on the South Hill began to reveal the level of preservation and some of the techniques used for the construction of roads and buildings in this district (Fig. 4). The excellent state of preservation of some of the material belonging to the final phase of occupation is attested by a rich destruction horizon overlying a cobbled street where many artefacts had fallen (Fig. 5), perhaps due to the collapse of an upper storey or of a timber structure built against the façade of the neighbouring building (whose traces were located in the form of a series of four post-holes). In addition to ceramics and a few metal finds, material from this area also included quantities of animal bone.

In the hinterland, field walkers covered an area of 1.19 km2 in 2017 (Fig. 6). Collection focused on the area to the north of the North Hill. Field survey around the city revealed an area of dense occupation to the east of the South Hill, a limited area southeast of the South Hill yielding high concentrations of material (comprising Late Roman and Byzantine as well as the usual Classical pottery). The northern edge of the study area showed more limited and less dense evidence. Magnetometry survey west of the northern part of the North Hill, where field walking in 2016 had yielded ceramic debris and a human tooth, located a group of small, strong anomalies, apparently representing graves, possibly a continuation of Robinson’s ‘Riverside Cemetery’, suggesting that this area lies beyond the boundary of the ancient city.

Preliminary study of the ceramics from both the North and South Hills suggests that the majority of the fine pottery (black-slipped and red-figured wares) was manufactured in the Chalkidiki, although Attic imports are also present. The majority of the ceramics found on both hills dates to the first half (often the second quarter) of the fourth century BC; no vessels (on current ceramic chronologies) seem to post-date the supposed destruction of the city in 348 BC.

A first multi-authored publication of the project’s research appeared in the 2017 Annual of the British School at Athens. 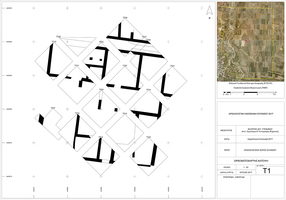 Fig. 2/ Olynthos 2017: Sketch plan of house B ix 6, North Hill, showing the layout of the trenches and walls as revealed in 2017 campaign (Filippos Stefanou). 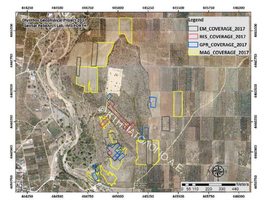 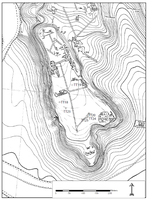 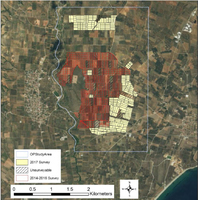 Fig. 6/ Olynthos 2017: Map showing locations of the fields walked by the project in summer 2017 (David Stone).