Key-words
Domestic space - Site Type
Type of Operation
Excavation - Rescue excavation
Institution
ΙΒ’ ΕΠΚΑ
Toponym
Arta
Linked Record
2001
Report
Arta (anc. Ambracia), Karaiskaki Street (Klara property). A. Angeli (ΙΒ’ ΕΠΚΑ) reports the discovery of a section of a Classical slab-covered water channel during excavation for the reinforcement of a house basement. A further part of the same channel was previously excavated on the Trobouki property to the east. The channel is bounded on either side by Classical walls, that on the north side being the external wall of a Classical house (preserving one angle), traces of which were found elsewhere on the building plot.
The external house walls are founded on the walls of an Archaic house on the same orientation (also represented elsewhere on the plot, although badly damaged by post-Byzantine incursions).
Author
Catherine MORGAN
Bibliographic reference(s)
ADelt 56-59 (2001-2004) B5, 12-13.
Date of creation
2013-06-10 00:00:00
Last modification
2018-08-22 09:24:39
Picture(s) 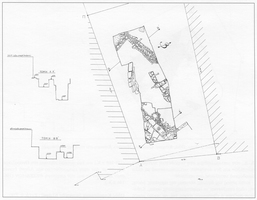