Sithonia (property of G. Papadakis and N. Epitropakis), Viannos. Stella Mandalaki (ΚΓ’ ΕΠΚΑ) reports that archaeological investigation was conducted after the landowners’ request for the construction of a building, due to the fact that archaeological evidence was visible at the S part of the property. The investigation covered an area of 262.50 square meters and brought to light part of a Late Minoan building complex.

The investigated complex consisted of five rooms and two elongated uniform areas, extending towards the N, S and E based on the orientation of the walls (Fig. 1). Area 1 is demarcated towards the S with an external wall built of large stones (width: 0.85 m.) (Fig. 2). An opening with three steps was detected at the centre of this wall (Fig. 3), leading to the interior of the building through a corridor (Fig. 4). Room 5, which is defined by two walls, was found at the SW part of Area 1. The room contained stone tools such as querns and grindstones, as well as round perforated weights, indicating workshop use at least during the last habitation phase. A cobbled pavement was unearthed above the floor at the SE corner of Area 1 (Fig. 5), 1.50×1 m., and was potentially related to the activities that took place in this space.

The uniform Areas 1 and 2 were originally contacting Rooms 1-4 (Fig. 7) which were partially excavated towards the N. LMII-LMIII pottery was collected from their interior, with some vessels, mainly conical cups being intact. The construction of a wall with a W-E orientation and of small transversal walls between it and the S wall of the rooms potentially signified the end of their use.

Room 6 (Fig. 8), which is older than Rooms 1-4, was excavated approximately 2 m. S of the external wall of the uniform areas.  The S wall has two building phases (Fig. 9). Inside the room, broken vessels, such as cooking pots, amphorae and pithoi were found among a clay male figurine, clay fragments and animal bones. The rectangular space E of Room 6 was potentially an air shaft. Under its floor, an older wall oriented SE-NW was discovered (Fig. 10).

Apart from the aforementioned Post-palatial building complex, evidence of Protopalatial MM II pottery was also identified in two deposits at the SE corner of Area 2 and E of the air shaft (Fig. 11). Another Protopalatial discharge was found under the sub-foundation of the external wall 2 (Fig. 13). East of the deposit and under the sub-foundation of wall 2 a tripod cooking pot was located in situ (Fig. 14). It bore no burning evidence and its dating is currently uncertain.

Despite the poor preservation of the excavated antiquities in the property, the habitation of the area during the Protopalatial and Post-palatial periods is established. 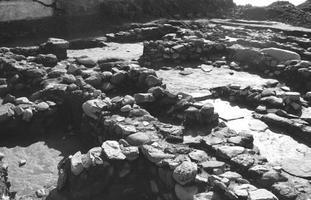 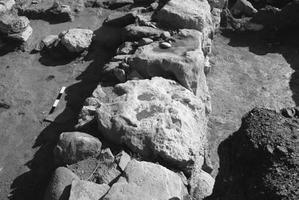 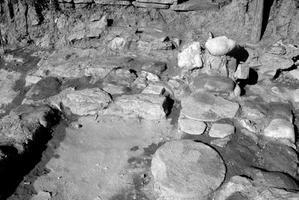 Fig. 3/ The descending steps of Area 1. A round worked stone potentially of workshop use is visible 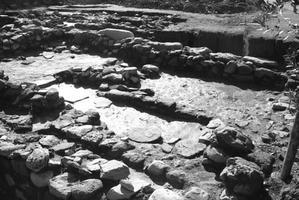 Fig. 4/ Area 1 with the corridor and Room 5 at the W part. Part of the cobbled pavement is visible at the SE corner 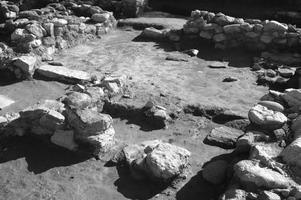 Fig. 5/ E part of Area 1. Floor slabs after the removal of the later floor made of hard calcareous soil. The cobbled pavement is visible in the SE corner 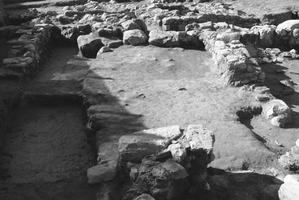 Fig. 6/ Area 2 with a small trial trench at the bottom left, where an older building phase was identified 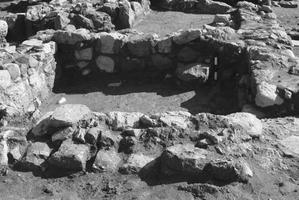 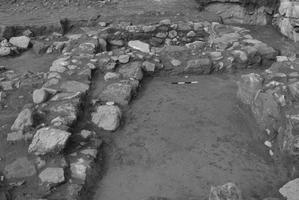 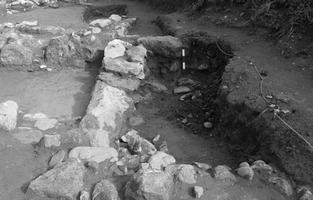 Fig. 10/ Older wall underneath the floor of the air shaft (Room 7). Room 6 is visible in the back 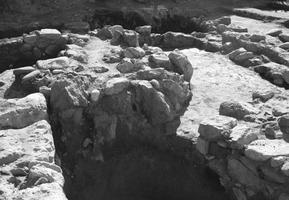 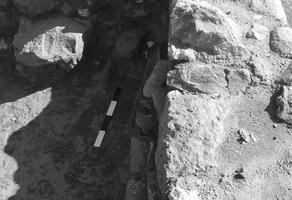 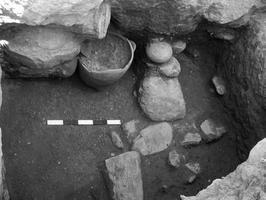 Fig. 13/ Rubbish pit with Protopalatial pottery under the sub-foundation of the external S wall of Area 1. Room 6 is visible on the right 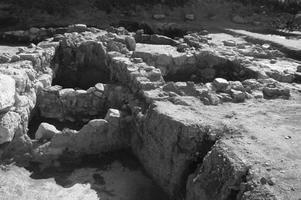 Fig. 14/ Cooking pot and stones under the sub-foundation of the S external wall of Area 1