Property of M. Vardakis, Arvi. Stella Mandalaki (ΚΓ’ ΕΠΚΑ) reports that in the plot of M. Vardakis, extending to 467.69 square meters in the centre of the village of Arvi, antiquities were discovered during the construction works for the erection of a new building. Seven trenches (dimensions: 4×4.20 m., depth: 1.85 m. up to the datum) were excavated in total, covering the area of the plot that could be built (Fig. 1,2,3).

At the E part of the excavated area an arched bath (diameter: 4.30 m, orientation: N-S) (Fig. 4,5) with a tiled façade and core-and-veneer technique in the interior of the walls (opus testaceum) was discovered. The circumferential wall of the building is 0.85 m. wide and its preserved height is 1.10 m., while its E part is completely destroyed. Part of a sub-foundation of small stones was detected towards the NW of the arched wall (Fig. 6). The entrance with three downward steps was found in the SE corner. A bench connecting with the N wall (height: 0.50 m., width: 0.30 m.) was also built for the bathers. The arched ceiling of the bath was decorated by blue glass and plaster with traces of red, yellow and green colour.  Fragments of mosaics and plates of glass, suggesting the existence of openings potentially above the marble revetment were found at the destruction layer of the building in the NW and SE.

The building incurred damage from an earthquake before its complete destruction, based on extensive cracks on the walls. A circumferential retaining wall (width: 0.90 m.) was built in order to strengthen the external arched one (Fig. 6), touching an earlier wall made of stones and plaster at the NW. The discovery of the final destruction layer from the collapse of the superstructure and the ceiling above the level of the retaining wall, suggest that the building was still in use after its repairing (Fig. 7).

The arched bath is dated to the 2nd c. AD, based on the masonry and the pottery collected under the foundations of the building. After its collapse, It was covered with a layer of stones and pot shards, while the area towards the N was cleaned and used anew, based on the existence of the surficial wall above the destruction layer (wall 12) (Fig. 6,7).

Two earlier rooms were discovered at the W of the bath (Fig. 8), whose walls were partially destroyed during the installation of the clay pipes moving towards the bath oriented SW-NE. Parts of clay pipes oriented NW-SE were found in two trenches at the north half of the plot. The anteroom of the praefurnium of the bathing complex was found in the SW corner of the plot (Fig. 9). The bathing complex was used as a kiln after its abandonment.

The bathing complex is mainly extending towards the S, outside of the limits of the Vardakis plot. It was decided that the arched bath, despite being partially preserved, would remain visited in the interior of the building, due to being one of the few surviving Roman remains in Arvi. 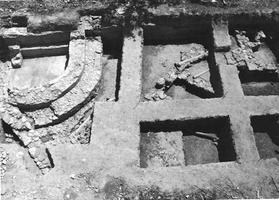 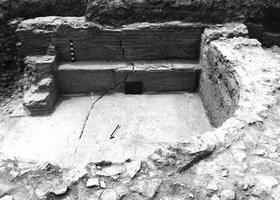 Fig. 4/ The arched bath from the N 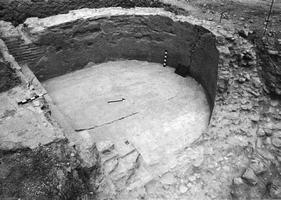 Fig. 5/ The arched bath from the SE 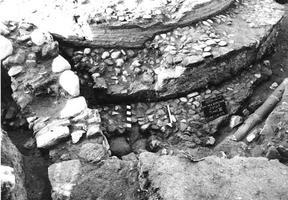 Fig. 6/ The circumferential retaining wall, the cobbled structure, expanding underneath it and the later wall 12

Fig. 7/ The circumferential retaining wall, the destruction layer from the collapse of the superstructure of the bath and the later wall 12 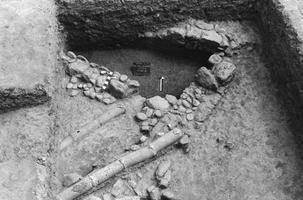 Fig. 8/ Older rooms which were destroyed during the installation of the clay pipes of the bathing complex

Fig. 9/ The anteroom of the praefurnium