The excavation of 2006 and 2007 brought to light 285 graves, including 87 pits, 34 tiled roof graves, 25 pithos graves, 84 burial vessels, 6 sarcophagi and 32 cremations. Most were discovered in the N or NE part of the plot, densely arranged in clusters (Fig. 1 and 2). Most of the graves date to the archaic period. 1000 smaller grave goods were found, including clay vessels, miniature vessels, bronze and lead figurines, buckles and coins.

Tiled roof graves - 16 were covered with Corinthian or Laconian tiles. 7 were ‘box-shaped’ and enclosed, including grave 502, a child’s burial.

Sarcophagi - all were made of porphyry and dated to the classical period.

Pithoi - most were decorated with three parallel ridges on the body. All were found placed vertically, except grave 498. Very few grave goods were found with this group, and only graves 434 and 438 are associated with small finds from the archaic period.

Burial vessels - these vessels were pithos-like, some with a pointed toe, and covered with either a tile or stone slab. Some contained burial goods, the most of which came from grave 500, containing eight aryballoi, one oinochoe, one kylix and three kotyliskes (Fig. 3). 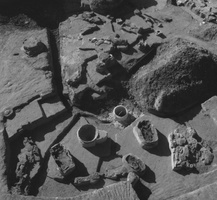 Fig. 1/ Abundance of graves in the N / NE sector. Pithoi in the centre, and cremation areas to the perimeter 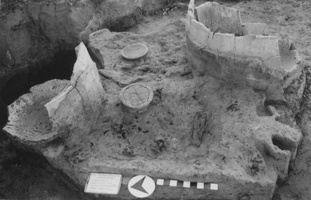 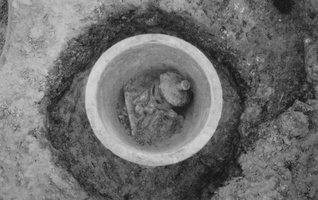