Pera Galini, Mylopotamos, Rethymno Eleni Tsivilika and Eleni Banou report that the archaeological investigation continued in Trench I, west of the  “adyton”,  at its south part, at the largest of the discovered pits and around of it (Fig. 1). From the centre of the pit, small sherds of a cooking pot and of cups were collected at first, while large cooking pot sherds were located deeper in the pit. Next to them, a small cup filled with charcoal and compact soil was found. Abundant charcoal was found in some areas of the pit as well, as well as cemented soil. In another spot, a cup with grooves was found upside down.

North of the pit, where during another season the neck of a closed overturned vessel (amphora) containing cup sherds and limpets was discovered, which as it appeared, was laying on a slab and was surrounded by small stones, concentrations of vessels and MM sherds were unearthed; these included fragments of cooking pots and cups, some of which were inside the cooking pots, or vials (Fig. 2) in hard soil with plenty of charchoal and occasionaly plaster. It became apparent that they were laying on an underlay of small wood shingles, some of which had a more orbital shape, creating cavities for some vessels, mainly vials.

The investigation continued and in Trench XXV in the north part (δ) of its west area, where again a significant amount of plaster, some with colour traces, and some large fragments in layers on top of one another, next to the eastern wall from which it seems they were detached. Some of these fragments were coloured with light brown and red colour or were decorated with blue bands, while elongated deepening was visible in some (Fig. 3). The paint had a fair amount of charcoal patches and the pottery, middle Minoan, comprised of cooking pot and cup fragments. A bronze fragment was also discovered. 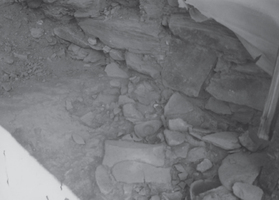 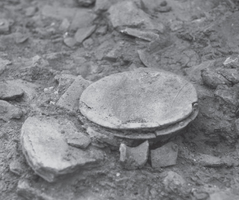 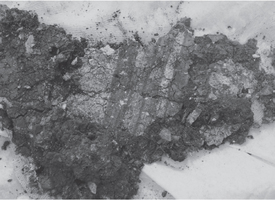