Site of Sgournes. Plot of L. Dermitzakis Maria Skordou (ΚΕ EPKA) reports that a new archaeological site of the historic times was located, prompted by the handing over of a concentration of funerary vessels (Fig. 1). The survey in combination with a construction request led to the locating of a necropolis, which extends to three consecutive hills. The southern of the hills of the area was named Sgournes by the locals. The adjoining hill is named Elliniko Spiliari (greek Spiliari). This name reveals the existence of the type of the chamber tomb, which as it was ascertained, was located there. The handed funerary vessels derived from the third hill, and they are dated to the 4th c. BC. Domestic remains that were found in another spot suggest the continuation and the long duration of the use of the area until the Roman period.

At the plot of L. Dermitzakis a salvage excavation was held (Fig. 2). There 14 graves belonging to a wider cemetery were discovered. The graves that came to light belong to the category of rock-cut rectangular graves (Fig. 3). In two other rock-shelters (V, VI) traces of quarrying during the secondary phase of use of the area were identified. This activity must have caused a “disturbance” to the previous funerary use of the rock, while it discloses the longest duration of the use of the area.  Regarding the preservation of the graves through time, the complexes are partially disturbed.

The funerary complexes contained 22 vessels, as well as a fair amount of fragments that belonged to small aryballoid lekythoi, attic style black-glazed skyphoi as well as ointment jars. The local production is ascertained and in general it seems that the local products were dominant, copying famous attic shapes and types broadly known in the majority of the centres of the Hellenic world, with a few original shapes also being present (Fig. 4). The category of the local copies of imported vessels included undecorated shapes, black-glazed or not (small lekythoi, lamps, ointment jars) while there was also an attempt to produce red-figure vessels, such as pelikai.

Based on the pottery, the use of the cemetery is dated from the end of the 4th to the first quarter of the 3rd c. BC.  A silver obol of Knossos, the Charon’s coin of grave 6 comprises a terminus post quem for the determination of the temporal limit of the beginning of the grave usage. 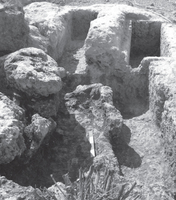