Chania National Stadium Efthimia Kataki and Aggeliki Tzigkou (ΚE ́ EPKA) report that the investigation at the east, north and south part of the stadium continued. At the east part, at the layer of clear sea sand, 25 adult burials (shaft graves) at least three successive layers, a shaft grave carved in the rock (Τ. 110) and seven pithos burials (Fig. 1) were found. Most of the adult skeletons were on supine position, with the hands placed on the sided or crossed on the pelvis or the chest, while a few skeletons were laying in contracted position (Fig. 2). They were accompanied by a few grave offerings: 16 vessels (unguentaria, olpai, small hydria, palettes), a lead pyxis, bronze or iron nails and foils, as well as a seated figurine, a bone pendant in tortoise shape (Fig. 3,4) and five silver Charon’s coins.

The infant pithos burials comprised of pointed amphorae and a hydria, without accompanying grave goods. The bones in the interior of the vessels were few and fragmented; although in some cases the small skeleton of the infant was distinct (Fig. 7).

Plenty of LM IIIC and LM IIIB pottery was found in the layer that appeared after the removal of the burials, while few to no pottery was present in the last layer above the natural rock. On the irregular surface of the natural rock, three more rock-cut graves were found in 2.60-2.80 m. deep: chamber tomb 111 with a dromos, pit grave 112 with a niche, and cist grave with covering slabs 113. In conclusion, based on the current research, it seems that at the east part of the stadium there was an extended cemetery of the 4th -3rd c. BC, with burials of adults and pithos burials of infants inside a sand layer.

At the north part of the stadium (moats 7-10) and more specifically at the southwestern side of moat 7, the earliest wall 8 was discovered, which was later removed due to collapse danger (Fig. 9). The pottery of the layers is of the Minoan period (EM-LM), while the pottery in the layers above the natural rock dates to the EM II-EM III period. In the south side of moat 20 the continuation of walls 1 and 2 was unearthed towards the E.

These consist of large worked stones and smaller crude ones, and are completely different in comparison to the rest of their parts which were discovered in 2009. It seems that at some point the worked stones were removed and only their filling remained.

The excavation continued in the area north of wall 1, where it has stopped in 2009 at a layer where burials have started to appear. East of wall 6, a shaft-grave (Τ. 92) containing a badly preserved skeleton, accompanied by two vessels (olpe and aryballoid lekythos) was found. Parts of burials (Τ. 96 and one more) were discovered under the later walls 1 and 6, verifying the original hypothesis that the cemetery of the 4th-3rd c. AD was extending in this area to the Hellenistic period as well; its use ceased and various buildings were constructed.

At the south part of the stadium (north extension of moat 3) six burials were found (Τ. 48, 114-116, 118-119), three of which (Τ. 48, 114, 119) were multiple (Fig. 10). They mainly were adult burials (two young children were among them) and were accompanied by few grave offerings: two bronze rings and three bronze coins. During their excavation a multitude of iron nails was found, as well as handles and wood traces from the planks they were laying on. Based on the coins, it seems that these burials were the result of an epidemic between the 14th and the 17th centuries. They might have been related to the plague epidemic that befell the city of Chania around 1600, in memory of which the church of Saint Roch (Άγιος Ρόκκος) was built in Splanzia in 1630.

Fig. 1/ Plan of the cemetery 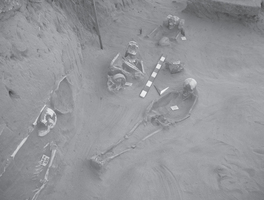 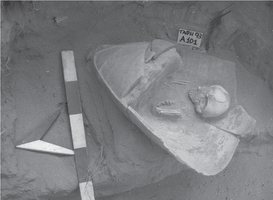 Fig. 7/ Pithos burial of an infant in pointed amphora 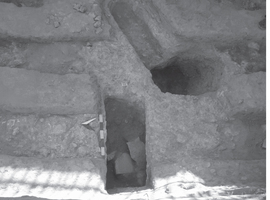 Fig. 9/ Final plan of the trench 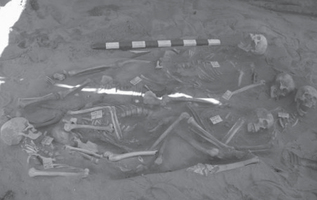