Saili, Petroni plot, Agios Georgios, Corfu. Gorgia Provata (H’ EPKA) reports on the excavation of an agricultural facility dating to the end of the fourth / start of the third century BC.

In the W part of the plot, foundations were located of two parallel walls. To the E Wall 1 was found at depth 11.25m, and was 5.75m long and width 0.75m. 0.55m to the W and parallel was found Wall 12, with maximum surviving length 6.13m and a width 0.50m. Both walls extend to the N part of the plot. Layers of mixed debris (mainly sherds and tiles) were found to the W of the plot. In this area two there are two enclosures that have been classified as ‘rooms’ roughy 2m wide. In one, a set of bronze coins was found, dating to the fourth century BC and made in Corinth.

There was also an extensive destruction layer in the S part of the plot. On its E side there was a wall (Wall 13), with maximum surviving length 2.70m and width 0.50m. It does not seem to be associated with any other walls so far.

A moratorium was discovered in the S part of the plot (Fig. 1), possibly used for crushing olives or grapes. It is notable that neither well nor water pipes have been found at the site. Based on the evidence processed so far, the most likely date for the structure is late Classical / early Hellenistic. 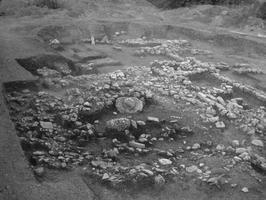 Fig. 2/ Partial view of the excavation 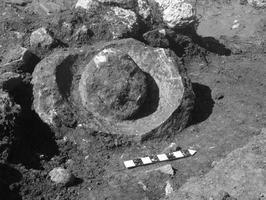