Marasli and Kyprou streets (plot owned by a private construction company for the construction of police headquarters), Garitsas, Corfu - 2007

Marasli and Kyprou streets (plot owned by a private construction company for the construction of police headquarters), Garitsas, Corfu. Gorgia Provata (H’ EPKA) reports on excavation in the area of the ancient cemetery.

In the N part of the plot, 43 burials of the archaic period were identified, at depths between 0.60m and 2m. 26 of the burials contained no remains and were quite disturbed. The deceased were in supine position, with the body placed directly on the ground. In some cases the graves were marked with stones. The richest grave was Grave 21, which contained a double skyphos, two pyxides, a kalathisos, a phiale, and a figurine (Fig. 1).

Five burials were pithos burials, comprising local pointed-toe Corfu vessels. One of the pithoi continued two burials (Fig. 2). The orientation of three pithoi was SW-NE, and the other two were EW. All burials belonged to adults, except for the double-burial, of which one of the individuals was a child.

Five stone sarcophagi were found, covered with monolithic slabs. They were oriented NS, contained single burials and had individuals in supine position. Grave 34 of this group contained nine vessels, one of which was archaic (Fig. 3). Other pottery from the grave seem to be late proto-corinthian.

Seven burial areas showed evidence of cremation. They comprised pithoi or other large vessels placed horizontally on the ground, covered, and stopped. Various vessels were found outside of graves, including miniatures, skyphoi, glass beads, a small figurine of a man, and a bronze tool (Fig. 4). 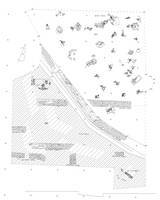 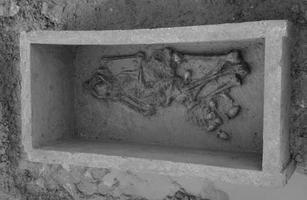