Key-words
Public building - Tomb - Bone - Public area - Domestic space - Sanctuary
Type of Operation
Excavation - Research excavation
Institution
École française d’Athènes
Toponym
Argos
Linked Record
20052006200720082010
Report
Argos, Aspis. G. Touchais (EfA/Paris 1) and A. Philippa-Touchais (EfA) report on the 2008 campaign.
The MH walls of the central area of house O were consolidated and cleaning was undertaken in various parts of the site (Fig. 1).
Preliminary study of the pottery and human bone remains recovered from the 2007 cleaning in the area of Vollgraff’s excavation shows that the 3 skeletons uncovered belong to a (probably male) adolescent 16/17 years old, a newborn baby suffering from congenital anaemia and an 8/9-year-old child.
At the request of the Δ' ΕΠΚΑ and the municipality of Argos, a project was developed to assess the Cl-Hel remains on the hill of Profitis Ilias, the Myc cemetery on the Deiras and the Sanctuary of Apollo Deiradiotis, with a view to creating an archaeological park for the better protection and display of the antiquities and to enhance the environment of the city of Argos.

Argos, Nannopoulos plot. A. Pariente (EfA/Lyon) and C. Piteros (Δ' ΕΠΚΑ) report on the 6th excavation campaign in this area, focused on the structures of the agora.
Thirty six further tombs were excavated, mostly dug into the fill associated with the general abandonment of the anc. agora. Twenty held the remains of adults, 12 the remains of children and 2 those of babies. Two had primary burials plus the remains of a secondary burial, and one grave contained the double burial of an adult and a child (Fig. 2). All were pit graves possibly covered with planks of wood. In the almost complete absence of grave goods, the burials could not be dated; the exception is a double burial where a tpq is provided by the fact that the bottom of the pit rests on what is probably a Byz road.
Excavation of the E part of the monumental exedra continued. Of particular interest is the junction between the foundation still in place and the collapsed remains of the seating, buried in fill in which the latest items date to the 6th and 7th Cts AD (Fig. 3). This impressive collection of blocks from the lowest level of the exedra resulted from sudden and uniform collapse, as indicated by the marked angle of the edges of the disturbance. In total, 12 blocks have been revealed from 3 foundations for the seating (limestone foundations, interior and exterior steps placed side by side, and a limestone bench) lying in the same relative order which they occupied within the structure itself. The causes of this massive collapse remain to be investigated. The fact that the blocks are intact indicates that the lowest level of the exedra had suffered no previous destruction before this collapse.
Author
Catherine MORGAN
Bibliographic reference(s)
Unpublished field report, École française d’Athènes Also : A. Philippa-Touchais, G. Touchais, L'Aspis, BCH 133.2 (2009), p. 567-580. A. Pariente, C. Piteros, L'agora : terrain Nannopoulos, BCH 133.2 (2009), p. 581-595.
Date of creation
2010-03-11 00:00:00
Last modification
2020-04-03 10:51:29
Picture(s) 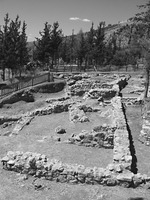 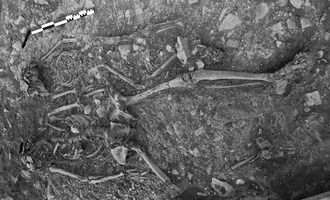