Key-words
Temple - Residence - Architectural revetments - Sculpture - Architectural terracotta - Religious building - Sanctuary - Building Type - Find Type - Site Type
Type of Operation
Excavation - Research excavation
Institution
Ministry of Culture (Στ' ΕΠΚΑ)
Toponym
Aigion, Vostitsa
Linked Record
200020082012
Report
Trapeza (Aigion). A. Vordos (Στ' ΕΠΚΑ) reports on 2 seasons of excavation, in 2007 and 2008 (following trials conducted in 1999 and 2000), of a Doric temple (31.56m x 16.72m) dating from the last quarter of the 6thCt BC (ca. 530−510). The krepis and superstructure are of grey sandstone, and the large quantity of architectural members preserved (column drums and capitals, geison and epistyle blocks etc.) allows a secure reconstruction of the building. A quantity of architectural terracottas was found (simas, pedimental geison fragments etc.) on which the paint is very well preserved, as well as fragments of sculpture, also of sandstone, belonging to the W pediment (and found together immediately outside the W front of the temple). These include the torso of a figure of Athena (wearing a sleeved chiton and himation, and with her aegis), fragments of the bodies and helmeted heads of warriors, and heads, legs and trappings of horses. This combination likely indicates that the subject of the pedimental group was a gigantomachy. While the base of the cult statue has been found in situ in the cella, there is no evidence as yet for the statue or for the identity of the deity worshipped. Surface prospection in the surrounding area has revealed walls, indicating that the temple was situated within a settlement area. The archaeological site has now been roofed.
Author
Catherine MORGAN
Bibliographic reference(s)
Unpublished field report, Στ' ΕΠΚΑ (A. Vordos)
Date of creation
2010-03-10 00:00:00
Last modification
2018-08-22 09:24:31
Picture(s) 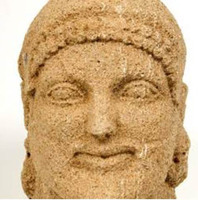 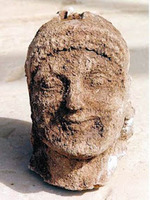