Key-words
Bath - Public building - Numismatics - Sculpture - Glass - Public area - Domestic space - Building Type - Find Type - Material Type - Site Type
Type of Operation
Excavation - Research excavation
Institution
Österreichisches Archäologisches Institut
Toponym
Aigeira
Linked Record
200620072008
Report
Aigeira. G. Ladstätter (Austrian Institute) reports on continuing excavation on the Solon terrace in the N of the so-called acropolis. Here an extensive building, excavated since 1998, is accessed on its W side by a N-S road. Its ground-plan and the fact that it contains several baths and banqueting rooms suggest that it was a public guesthouse. The building was built in the LCl period and remained in continuous use until the LHel, undergoing various additions and modifications over time. It may have had a partial secondary use in the ERom Imperial period (reported in 2007). The 2008 excavations concentrated on the SW corner of the structure, enabling its full dimensions of 30m x 28m to be verified (Fig. 1).
In spite of its poor state of preservation, the SW corner of the guesthouse can be reconstructed as a peristyle courtyard, based on 3 surviving plinths of local conglomerate, placed as the corners of a square 4m w. This open court is surrounded on all 4 sides by halls 3.3m d. To the E, it adjoins a roughly square ‘central room’ (6.6m x 7m), subdivided by a N-S wall into 2 roughly equal compartments. Through a preserved door opening, this room gives access to the ensemble of antechamber and andron excavated in 2006 and 2007. Current understanding of the structure indicates that this S axis of rooms is the result of an E3rd Ct BC modification, when the original LCl building was extended to the S.
As to its later use, excavation has indicated the following advanced Hel modifications in the peristyle and central room. In the context of the creation of a small bath in the N wing of the peristyle, walls were placed between its N pillars (2002, 2003 excavations); the S pillars were probably walled up at the same time (2008 excavation). Whether the peristyle remained an open courtyard at this time, or was roofed and integrated into the newly created complex, cannot be ascertained. The earth deposits that abutted the walled-up S row of pillars contained copious Hel material, which was placed in the course of levelling activity in connection with the architectural modifications. Apart from very small fragments of coarsewares and finewares, it included several substantially preserved plates, 2 small female terracotta heads, a bronze coin of Sikyon and sherds of a blue glass cup.
In the ‘central room’, the floor was raised and a transverse wall placed in the E compartment, subdividing it into 2 equal-sized 3m square rooms. The erection of this wall is contemporary with the closure of the door to the antechamber; thus, we must assume that a new, N, access to the antechamber and andron was created at that time. Similar to the evidence from the N part of the ‘central room’ (2006), in 2008 the S part was also found to contain deliberately introduced clay packings which formed the substructure for a new floor level; in some places, burnt clay floor levels had survived. These underfloor packings contained numerous finds: apart from heavily fragmented sherds of coarsewares and finewares, there were 2 carefully deposited and fully preserved filter jugs of advanced Hel date; a similarly carefully placed deposit in the same context consisted of a largely preserved Hel plate of local clay, together with a well-preserved Hel red-slipped juglet. It can be suggested that these vessels are connected with the symposiastic inventory of the andron to the SE. Another interesting 2008 find from the underfloor packing consists of 2 Hel clay protomes in the shape of female figures, roughly one-third life-sized, and with outstretched arms. Several fragments of them had already been found in 2006.
Of post-Hel use in the SW corner of the building, a wall survives in the area of the original E wing of the peristyle. This stone setting follows the orientation of the building, but its foundation is at a notably higher level than the Hel walls, and executed exclusively in conglomerate rubble.
The open-plan excavation of architectural remains in the SW of the guesthouse was halted at the level of the lower edges of the Hel packings. As already noted in 2007, underneath them is a dark earth/clay packing 0.006m d.that contains exclusively PH pottery. A sounding in 2008 supported these results and provided numerous fragments of MNeo and LNeo vessels, and a few LMyc specimens (Fig. 2).
In the context of the 2008 fieldwork, W. Gauß continued the study of finds from W. Alzinger’s 1972−1981 excavations on the plateau SE of the acropolis. In parallel, S. Jalkotzy and E. Alram-Stern (Mycenaean Commission, Austrian Academy of Sciences, Vienna) continued their study of the PH finds from Alzinger’s 1972−1981 excavations on the acropolis.
Author
Catherine MORGAN
Bibliographic reference(s)
Unpublished field report, Österreichisches Archäologisches Institut
Date of creation
2010-03-10 00:00:00
Last modification
2018-08-22 09:24:31
Picture(s) 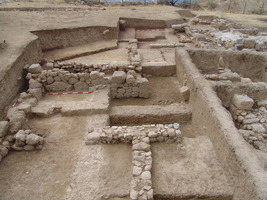 Fig. 1/ Fig. 1. Aigeira: architectural remains in the SW corner of the guesthouse. 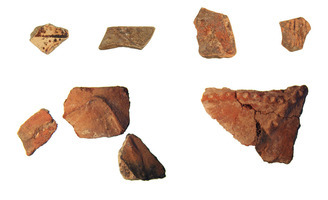