Key-words
Fortifications - Port - Building Type - Site Type
Type of Operation
Survey
Institution
Finnish Institute at Athens: Ministry of Culture (Ephoria of Maritime Antiquities; 25th EBA)
Toponym
Kyllini, Kyllene, Kylini
Linked Record
20072008
Report
Kyllini Harbour Project. J. Pakkanen (Finnish Institute), K. Preka-Alexandri (Director emerita, EMA) and D. Athanasoulis (formerly 6th EBA, now Director, 25th EBA) report on a 2nd season of survey of the underwater remains of an anc. naval base and Fr harbour. The harbour had an important geostrategic location and a tactical role in warfare and trade in W Greece from Cl antiquity to Med times, being the principal harbour of anc. Elis. The existence of Gr harbour structures below those of the Fr period was verified in 2007 and 2008.
The aim of the survey is to record all architectural features in 3D. An area of ca. 350m x 150m has so far been surveyed, and almost 16,000 topographical points taken, mapping topographical and archaeological features (Fig. 1). Marine geomorphological studies were undertaken by G. Papatheodorou and M. Geraga (Patras): marine surveying techniques employed include sub-bottom profiling, side-scan sonar and magnetometry. Most walls and structures are in shallow water and relatively easy to record using a total station: points deeper than 4m were recorded by a diver.
Fig. 1 presents a preliminary plan of the study area in 2007 and 2008 with a digital elevation model of the mapped features in the background. The harbour entrance from the NE is clear: the mouth may have been blocked by the destruction of the towers on both sides of the entrance (matching literary descriptions of the destruction of the installations in 1428).
Fig. 2 is a more detailed preliminary plan of the structures at the E end of the study area: the darker areas are those parts currently above sea level. W1 is a typical Fr wall built in mixed technique employing reused ashlar blocks and rubble set in mortar. Structure S1a is a Gr platform of ashlar blocks, protected from the waves by the Fr structure S1b which is partially built on top of it. S1a clearly indicates the rise in relative sea levels from antiquity to the present day: surfaces currently 0.6m below sea level have cuttings for iron dowels set in lead, and thus must have been out of the water in antiquity.
Author
Catherine MORGAN
Bibliographic reference(s)
Unpublished field report, Finnish Institute at Athens
Date of creation
2010-03-10 00:00:00
Last modification
2018-08-22 09:24:31
Picture(s) 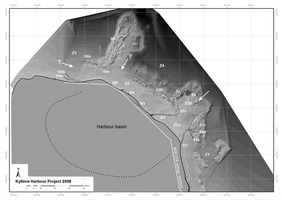