Key-words
Palace - Tomb - Painting - Bone - Domestic space - Building Type - Find Type - Material Type - Site Type
Type of Operation
Study
Institution
American School of Classical Studies
Toponym
Chora, Lygudista, Ligoudista
Linked Record
2006200720082008 (1)2009201020152019
Report
Pylos. S. Stocker (ASCSA) and J.L. Davis (Director, ASCSA) report on a further study season.
Examination of faunal remains and their archaeological contexts has now been completed. Some 13,000 specimens, from the end of the EBA until the final destruction of the Palace of Nestor, have been studied; EMyc deposits are particularly well represented. Study of human remains and artefacts from graves is nearly finished. LHIIIA is the principal period of use of chamber tombs associated with the palace, although there were burials in several tombs in LHIIIC. Analysis of human remains from several chamber tombs at Kato Rouga, on the SW edge of Chora, was begun in collaboration with the ΛΗ' ΕΠΚΑ.
Analysis of pottery from the pantries continued; matching fingerprints are helping to identify the products of individual potters. Systematic study of floor-plaster from the pantries of the palace suggests that here the main building had only a single upper floor. Plaster offering tables were inventoried.
All fragments of wall-paintings in the Chora Museum have now been digitally photographed, with mending focused on Hall 64 and Room 6; a surprising new find from the latter is a naturalistically rendered running lion. A survey of nautilus representations (Fig. 1) reveals the stylistic diversity of this motif. New joins were made to figures from the large-scale procession.
Author
Catherine MORGAN
Bibliographic reference(s)
Unpublished field report, American School of Classical Studies
Date of creation
2010-03-10 00:00:00
Last modification
2018-08-22 09:24:31
Picture(s) 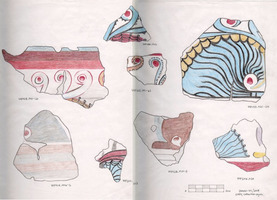