Key-words
Public building - Basilica - Theatre - Peribolos - Tomb - Stoa - Inscription - Mosaic - Sculpture - Metal - Stone - Religious building - Entertainment venue - Hydraulic installation - Commercial area - Public area - Cemetery - Sanctuary
Type of Operation
Excavation - Research excavation
Institution
Archaeological Society of Athens
Toponym
Messini (ancient), Messène antique
Linked Record
19931995199719981999200020022004200620072008 (1)20082009 (1)20092010 (1)20102011201220132014201520162017201820192020
Report
Messene. P. Themelis (ASA) reports on continuing excavation in the theatre, the Sanctuary of Isis and Sarapis, in the basilica, and in the N stoa in the agora.
In the theatre area, excavation continued in the EByz cemetery reported in 2007, moving towards the Hel retaining wall of the E parodos. Seventeen cist graves were excavated, divided into 4 groups; these were built from the worked stones of the theatre, terracotta and stone slabs. The first group, of 5 tombs, included 4 found empty and one with the skeleton of a young woman without grave goods. Of the other groups, one had 3 tombs, the 2nd 7 and the 3rd 2 (Fig. 1). All were similar, contemporary constructions and contained bodies accompanied by pottery oinochoai, and dated to a later, EByz period. Particularly characteristic of these cemeteries is the peribolos which encloses them in an ordered arrangement, their separation into unitary groups with the use of common partition walls in each row to economise on space and cost, and the fact that each group was likely used for a family. The overall appearance of the burials confirms that they were contemporary constructions.
In the course of the cemetery excavation, the retaining wall of the E parodos of the theatre was also fully revealed; the E end of this is now visible, where it turns in a right angle and continues to the S. The W retaining wall shows the same trait. The E wall is exceptionally well preserved. It is constructed in a variant of the isodomic system with tooling on the visible surfaces of the blocks and small infillings, and in one case deviation from the verticality of the jointing (Fig. 2).
In the fill between the group of 5 graves and the retaining wall was found the head of a marble statue of a woman: the face is destroyed, with only the eyes preserved. The hairstyle copies that of statues of Faustina II. The head was a recutting of an older statue of a man, a practice attested by other sculptures of the 4thCt AD made in a local workshop at Messene, such as the head of Hermes (Fig. 3) and that of the Emperor Constantine, which were both recut from statues of women of the Hel period.
Excavation was resumed in the Sanctuary of Isis and Sarapis. The plan was clarified of an underground Π-shaped reservoir located S of the theatre and separated from it by a road (6m w.). The N branch of the reservoir is 46.5m l. and the E and W 35.5ml. It is 3.25m w. and covered with an arched vault which has no openings for light. However, one high arched opening was located, approximately in the middle of the W branch, and 4 smaller ones in the N branch. At the end of the 4thCt AD, the reservoir, then apparently out of use and unroofed, served the inhabitants of Messene as a dump for refuse, sculpture included. AR 50 (2003−2004), 29 reported fragments of a statue of Perseus holding the head of Medusa and a seated statue of Isis nursing Horus. New fragments belonging to this group, from the body of Horus, were found in 2008 (Fig. 4). The right side of a head of a marble statue of a male figure of the 2nd Ct AD was also found, plus the life-sized marble head of a lioness and pieces of many marble statues. These all probably come from the theatre and the Sanctuary of Isis, and are products of local workshops at Messene, mostly of the 2ndCt AD. They were probably broken and deposited in the disused reservoir by fanatical Christians around the end of the 4th Ct AD. In the W branch of the reservoir were many fragments of mosaic pavements, as well as tesserae which probably came from the decoration of the Isis shrine. The function of the underground Π-shaped structure as a reservoir was clarified by the discovery of water channels in the upper part of the walls. The Sanctuary of Isis lay E of the reservoir, along with the remains of the basilica. On one of the architectural members of the basilica, in secondary use, was an inscription [-- ἔ]ργον Ἴσιδος (see PAE [2001], 82).
The narthex of the basilica was completely uncovered, and one monolithic column from the S colonnade re-erected with its base and capital. Investigation outside the S nave revealed many Ch cist tombs. A capital from the base of a bronze statue was found in secondary use: an inscription in large letters reads Ἀγαθὴ Τύχη. Also in secondary use, as a paving stone in the central nave, was a catalogue inscription Κιστιοκόσμων Ἀθηνᾶς Κυπαρισσίας.
In the N stoa of the agora, stone blocks were re-erected and conservation undertaken of the 2 counters for withdrawing and measuring solids for the agoranomeion. On their undersides, these blocks preserved sockets and clamps for the suspension of the receptacles into which fell the solid goods being measured. The bronze head of Medusa reported in 2007 was conserved, thus confirming its form with characteristic deranged hair, crowning snakes and arresting gaze (Figs. 5-7).
Author
Catherine MORGAN
Bibliographic reference(s)
Ergon (2008), 46−60
Date of creation
2010-03-10 00:00:00
Last modification
2021-05-24 21:24:09
Picture(s) 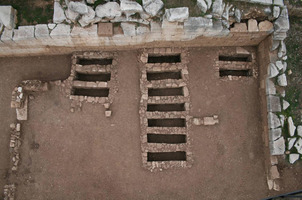 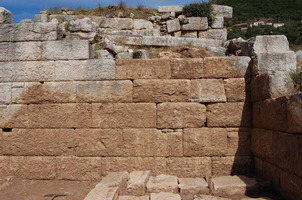 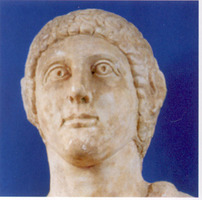 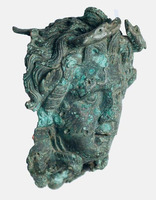 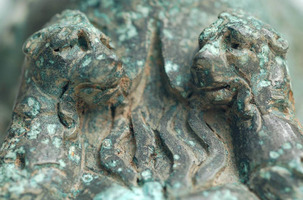