Key-words
Theatre - Tomb - Inscription - Architectural revetments - Architectural terracotta - Bone - Entertainment venue - Public area - Domestic space - Sanctuary - Building Type - Find Type - Material Type - Site Type
Type of Operation
Excavation - Research excavation
Institution
Ministry of Culture (Ε' ΕΠΚΑ; 5th EBA); British School at Athens
Toponym
Sparte, Sparta, Lakedaimon, Lacedaemon
Linked Record
20052005 (1)2005 (2)2005 (3)20062007200820112011 (1)2011 (2)
Report
Sparta theatre. C. Morgan (Director, BSA), A. Vasilogamvrou (Director, Ε' ΕΠΚΑ) and K. Diamanti (Director, 5th EBA) report on the first season of excavation in the anc. theatre, focusing on investigation of the extent and nature of LRom and Byz use of the space, and combining new excavation with reappraisal of BSA work in the 1920s.
Excavation was conducted in the W part of the middle and upper cavea in order to locate the SW edge of the LAntique settlement on the acropolis and to establish the N limits of the housing on the W side of the orchestra, partially excavated in the 1990s (Fig. 1).
Attention focused on Byz landscaping between the main settlement areas. S of the lower retaining wall of the cavea, a substantial MByz (12thCt) terrace wall prevented erosion of the upper slope and hill-wash onto structures downslope. This contains a quantity of architectural spolia from the theatre. In the easternmost of the upper cavea trenches, abutting the cavea retaining wall, one of the radial paths which linked the 2 settlement areas was revealed, containing MByz pottery.
In the westernmost of the upper trenches, an anomaly revealed in the 2007 resistivity survey was found to be a mass grave of the MByz period (Fig. 2). A large pit cut into the clay fill of the theatre housed a 2.5m x 2m structure of uncoursed cobbles, with walls, containing architectural spolia, which were well faced and plastered only on the interior. A composite lotus and acanthus capital reused within the lower wall probably originated in the upper part of the theatre (Fig. 3). To the N and W, the construction pit was backfilled with domestic refuse, including EByz−MByz cooking and table wares, and a quantity of severely burnt roof tile of Rom type, debris of a major fire nearby. It remains unclear whether the structure was entered from the side or from the top, and there is no evidence to show how it was covered. The chamber contained the remains of more than 22 individuals; preliminary analysis suggests both male and female, mostly adults of a wide age range, but with a few sub-adults and at least one child of 8−10 years. These remains were deposited in 4 episodes featuring very different practices. The lowest level contained an ossuary-like arrangement of crania against the N wall with long bones together to the S (Fig. 4). Subsequently, a low interior wall or bench was added on the W side of the chamber and a quantity of human bone was packed behind it. Over this was an inhumation which had been heavily truncated. And finally, a large deposit of mixed semi-articulated bone with badly broken bone overlaid it. Over the entire grave interior lay a mixed deposit of pottery and animal bone. It seems that the structure was initially intended as an ossuary but was rapidly reused as a tomb. All 4 episodes took place within the 12th−E13th Ct and were probably mostly reburials of remains originally deposited on the acropolis. There is as yet no evidence for a religious building in this area, but these unusual circumstances have a possible parallel in a multiple burial excavated in 1926 S of the theatre.
Debris from the LRom and (mostly) Byz settlement on the acropolis was encountered in all the upper trenches; a little LRom pottery (3rd−6thCt), tile and brick, EByz cookware (ca. 9th−E10th Ct) and MByz (mostly 12th Ct) amphorae and tableware confirm the chronology of the main settlement phases. A distinctive group of EByz cookpots was isolated, the earliest of which, manufactured on a slow wheel and hand finished, is tentatively dated in the L8thor 9thCt. All trenches produced pottery and votives washed down from the Sanctuary of Athena Chalkioikos on the acropolis. Of particular interest are 2 fragments of an Ar terracotta antefix and a partially preserved stone jumping weight of the L6th−E5thCt BC with an unusually long inscription (Fig. 5). The name of the Spartan who dedicated the weight is not preserved, and was probably on a second halter, but a victory at the Olympic Games can be restored, the athlete offering up his sporting equipment to the goddess on his return home.
Author
Catherine MORGAN
Bibliographic reference(s)
Unpublished field report, British School at Athens
Date of creation
2010-03-10 00:00:00
Last modification
2018-08-22 09:24:31
Picture(s) 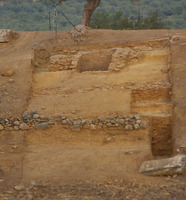 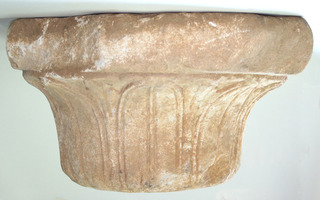 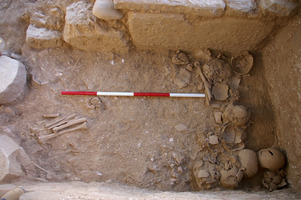