Toponym
Athens Centre (Plaka, Monastiraki), Athènes Centre
Linked Record
2020
Report
25 Aiolou Street, Athens. The Ephorate of Antiquities of the City of Athens reports on the discovering of a Herm, found during the construction of a sewage network at 25 Aiolou Street. The herm was discovered opposite the Church of Agia Irini, at a depth of 1.30m. The head was once attached to a column, and the iconography is typical of the style of Ermos Propylaios of Alkamenos.
The head had been mounted in secondary use in the S side of a wall in the modern sewer connection. The herm probably dates from the end of the fourth or start of the third century BC. 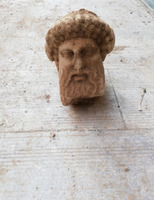