Excavations had continued in the area of a bath complex located in 2019. To the west, areas for the supply of bath water were discovered. In the south, the excavation of the ‘changing rooms’ was completed, with a total area of ​​62 sq.m. The whole space was covered by clay floor slabs. The changing rooms to the east connect with two new rooms that are identified with the tepidarium. One of them is a pool of 20 sq.m. and the second room has on its floor structures that suggest the existence of baths. East of the tepidarium remains of an arched structure were found and an extensive clay floor.

The bath complex seems to have been constructed in the time of Augustus with interventions and reconstructions until the late Roman times. However, its northern part may have been built on an archaic wall. An archaic deposit investigated this year yielded pottery, a bronze ring, bronze and bone, and an animal-shaped figurine. In the northwestern part of the facility, retaining walls were discovered, built largely with archaic spolia. Finally, north of the bath complex, a new pool measuring 8.5 sq.m. was unveiled.

Two inscriptions were found on the walls of the bathroom, one of which dates to the fifth century BC and was found with a silver obol from Argos. The inscription was on a statue base dating to the fourth century BC, bearing the name ΠΕΙΣΑΝΔΡΙΔΑΣ.

The baths currently cover an area of 875 sq.m., even though the frigidarium has not yet been found. Given the size, this area was probably for public use. In the eastern area, extensive building foundations were found (282 sq.m.), in a north - south layout, which are identified with areas of commercial activity. These areas were connected to the baths via a cobbled road. Objects of commercial activity were found here: inscribed bronze scales, millstones, glass and ceramic vessels, bronze tools, jewellery, iron objects such as forks, buckles, plates, nails, a spear, a stone inscription, a clay inscription and over 300 coins. 72 bronze coins of the fifth century AD, and 29 coins of the emperors Marcian, Justin I and Justinian (AD 450 – AD 565) were found here, as well as a gold ring. Finally, south of the baths was located a workshop area (​​47 sq.m.) relating to iron processing. 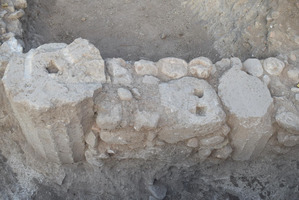 Fig. 2/ Architectural pieces in secondary use 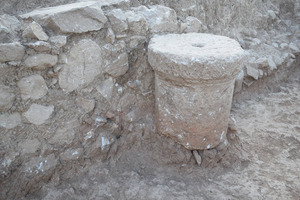 Fig. 3/ Architectural pieces in secondary use 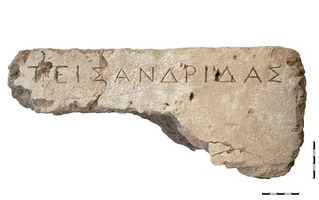 Fig. 4/ Inscription on a stone base of a bronze statue, fourth century BC 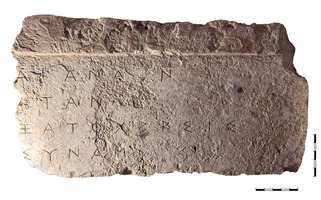 Fig. 5/ Part of a public inscription, fifth century BC 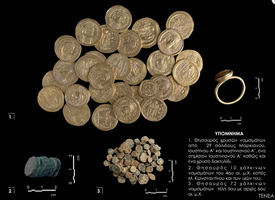 Fig. 6/ : i) Hoard of 29 gold coins of Marcian, Justin I and Justinian, ii) Hoard of 10 bronze coins of the fourth century AD iii) Hoard of 72 coins from the end of the fifth and start of the sixth centuries AD 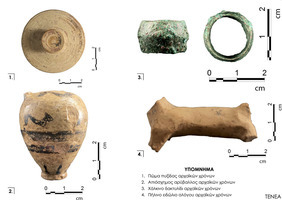 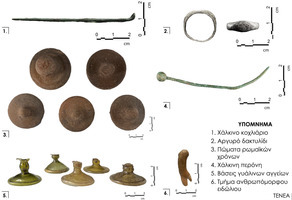