Hersonissos, plot of V. Mastorakis. Stella Mandalaki (ΚΓ’ EPKA) reports that in the excavated part of the plot, extended architectural remains of the Late Roman and Early Christian periods were unearthed, while at the same time Hellenistic graves carved in the natural rock were identified, without being excavated. The architectural structures comprise a room complex (Fig. 1), in the interior of which a destruction layer with structure material from the walls and tiles of the roof was detected (Fig. 2). Two rooms and parts of others were excavated. Hearths with articulate evidence of burning in their interior were found in all spaces. Outside of the western room an area for discarding structure material, pottery and abundant fragments of painted wall-mounted plaster with a frame with geometric decoration was detected. A built terracotta pipe was unearthed around the south and west wall of one of the rooms (Fig. 3). The architectural structures comprise of two construction phases (Fig. 4) which probably fall into the Late Roman and Early Christian periods. One of the finds was the right arm of a terracotta figurine which holds a footless conical cup, as well as the left arm of a marble statue. 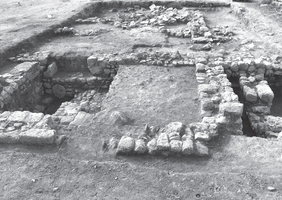 Fig. 1/ Rooms of the settlement complex 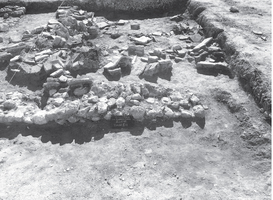 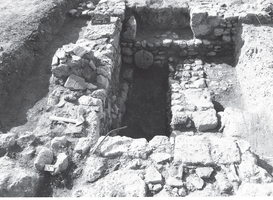 Fig. 3/ Pipe around the room