Toponym
Asclepieion, Épidaure, Epidaurus, Sanctuaire, Sanctuary
Linked Record
2020
Report
A team from the Ephorate of Antiquities of the Argolid and the University of Athens have continued to work on exposing an archaic period building found in the area of the Tholos, in the Asklepion of Epidauros. This building was first discovered in 2019, and further work was carried out in August 2020.
The building dates to the end of the seventh or start of the sixth century BC. Its form is without parallel from the Greek world at this time. Beneath the ground foundations are dug into the bedrock, which has been lined with stone walls and a red mortar. The floor is covered in white pebbles.
The most recent excavations have revealed the full width of the building, which is 3.6m at the foundation level and reaches 8.2m in some parts. The building is at least 10.2m long, and continues to the west and partly below the Tholos. Continued excavation is expected to bring to light the building’s full length. A small square recess found on the floor level is thought to be from the installation of a staircase in this building. 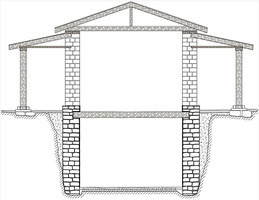 Fig. 1/ Reconstruction drawing of the building Fig. 2/ Recess in the floor, possibly marking the existence of a staircase