Toponym
Ziros
Linked Record
2009
Report
Municipality of Sitia, Droggari of Ziros. Chryssa Sofianou (ΚΔ’ EPKA) reports that a built tholos tomb was illegally excavated, and has been partially destroyed due to the removal of the keystone (lintel stone) of the tholos. From the mixed soils in the interior and the exterior of the grave, a multitude of skeletal remains and scant pottery dating to the Sub-Minoan-Early Geometric period were collected. The grave is megalithic, with a square profile and a tholos (Fig. 1).
[Entry created by K. Christakis and translated by C. Koureta] 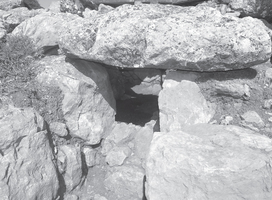 Fig. 1/ Entrance of the tholos tomb