Toponym
Papadiokampos
Linked Record
2009
Report
Municipality of Sitia, Papadiokampos. Chryssa Sofianou (KΔ’ EPKA) reports the completing of the rescue excavation of House B.1. In total, eleven spaces as well as the stairway leading to the upper floor were excavated (Fig. 1). The results of the radioscopy conducted in the area showed that the house was isolated and that the empty space around it was either a yard or a garden. The stairway would separate the house into two wings, the east and the west, which communicated through a small space in the beginning of the steps (Fig. 2).  The pottery is dated to the LM IB period. At least 11 pithoi were found in different areas of the house, a number that surpasses the domestic needs for storage of commodities. The bronze tools, scythes or pruners and chisels, reveal the daily activities of the inhabitants. Moreover, golden loops, ingot fragments, bronze sheets, a crucible for melting metals, stone moulds for the manufacturing of earrings (Fig. 3), loom weights and their stone mould were found. The archaeobotanical analysis produced remains from olives, grapes, figs, cereal, grains, lentils, flax and potentially safflower. 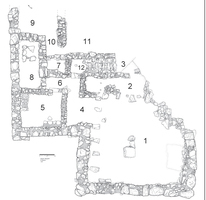 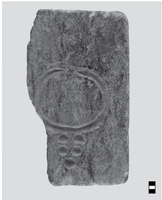