Toponym
Amyklai, Sklavochori
Linked Record
200020072011201820192020
Report
Amyklai. S. Vlizos (ASA) reports on continued excavation at this site (Fig. 1). The preserved part of a wall on the S side of the hill was completely uncovered (Fig. 2).  It is placed on the natural rock and built from field stones of varying sizes, with the interstices filled with small stones.  Its length is 21m and its height reaches 1.10m, while its thickness is between 1.30m and 1.80m maximum.  The fill in front of the wall and its surface produced characteristic black soils with remains of burning, which contained a large number of miniature vessels (Fig. 3), in reality likenesses of vessels: kantharoi, amphoras, thymiateria, aryballoi, bone, as well as bone and metal objects, hair-rings, plaques, and a few animal bones.  There were sherds of the Early Helladic to the early Archaic periods.  The results of the excavation suggest that the wall had originally been respected, went out of use, and the area was used for rituals in which the participants deposited their small offerings.

Among the finds the following are singled out: a fragmentary statuette of an owl and a fragmentary roof-tile with a two-line inscription, of which the second line is the name ΗΟΡΜΙΠΠΟΣ (Fig. 4); iron spits, tools, lead garlands, bronze beads, eyelids from a bronze statue (Fig. 5); bone plaques with geometric decoration (Fig. 6); and astragaloi.  Among the objects randomly scattered in the fill were fragments of clay moulds for bronze-casting and fragments of glass which are thought to be debris from a workshop in the sanctuary for the manufacture of objects and statues.
Author
John BENNET
Bibliographic reference(s)
Ergon (2019), 29-33.
Date of creation
2020-08-21 16:29:49
Last modification
2020-08-21 17:20:42
Picture(s) 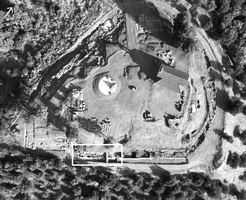 Fig. 1/ Amyklai: Aerial photograph of the Amyklaion with the area of excavations indicated. Fig. 2/ Amyklai: The continuation of the wall to the E, abutting on the ancient peribolos.

Fig. 3/ Amyklai: Miniature vessels from the area of the wall. 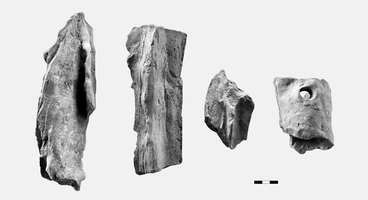