Toponym
Thouria
Linked Record
200820092010201420162017201820192020
Report
Thouria. X. Arapogianni (ASA) reports on a further season of excavation of the ancient theatre of Thouria (Figs 1-3), during which the stage-building (skenotheke) was completely exposed, its interior dimensions 21.40m x 7.70m (Fig. 2). On the floor of the stage-building, after the abandonment of the theatre, a two-storey building was built - largely from stone from the stage-building – comprising four inter-communicating spaces (Fig. 4).  A stone staircase (6 steps preserved) led to the upper floor.  Other walls were revealed, built with parts of a Doric building: epistyles with regulae and guttae, parts of a frieze with triglyphs and metopes, which were preserved with their white plaster, coloured in certain places with red.  Another, portable, find was a perirrhanterio, almost complete, which implies the existence of a shrine.  These later structures did not damage severely the floor of the stage-building, in which channels (for moving scenery) of at least 45m have been confirmed.  The N supporting wall was also more completely revealed, with strong buttresses on its E and W side: length 16m and maximum height 3.10m.

Near the theatre, at the location Ellinika, there came to light architectural parts of a large Doric-style building, perhaps a temple: fluted column drums, fragments of Doric capitals, epistyles, blocks of a stylobate and an ashlar retaining-wall visible for 50m, which supported an extensive terrace (Fig. 5).

W of the Monastery of Ellinika, cleaning of undergrowth revealed part of the ashlar wall of ancient Thouria.  Spherical stones found in the fill covering the wall attest to a siege.  The wall preserves buttresses and between them niches comprising pilasters with large capitals, which carried monoliths as their roof (Figs 6-7).
Author
John BENNET
Bibliographic reference(s)
Ergon (2019), 25-29.
Date of creation
2020-08-21 16:13:23
Last modification
2020-08-21 17:21:54
Picture(s) 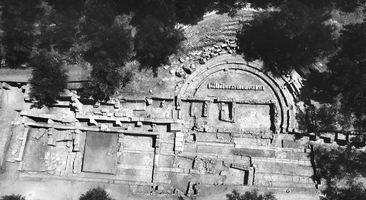 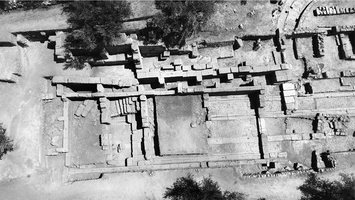 Fig. 4/ Thouria: Stage-building: wall built out of old architectural member, from the W. 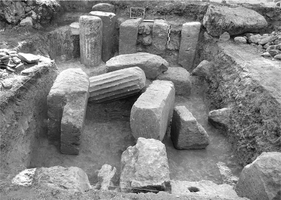 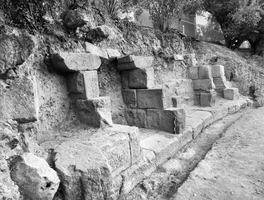 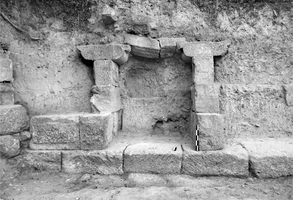