Toponym
Eleusis, Elefsis, Elefsina, Lepsina
Linked Record
2013
Report
Eleusis, secondary sewage network. Kalliopi Papaggeli and Chrysanthu Tzavali (Γ’ ΕΠΚΑ) report on discoveries made from 80 trenches covering 2.5 square kilometres, opened during the laying of the new sewage network.
In the N part of the city. On Kontoulis Street between Peisistratos Street and Laskos Street, walls of domestic structures dating to the Roman period were found, two wells and kilns. Pipes were found further along the street, and two late Roman ossuaries E of Kimnos street, nearby to a cemetery of Late Geometric to Early Archaic date (four cremations, two amphora burials and two pits). On Peisistratos Street there were buildings of the Hellenistic period, and burials of the Archaic period (five amphora burials and two pits). On Perikles Street, Roman piping running between the sanctuary and the sea. On Kimonos Street, walls of the Roman and Hellenistic periods, as well as a well and cistern. On Karaiskaki Street, a wall and two wells of the Roman period. On Stathis Street, a wall of post-Classical date. On Milisi Street, four burials of the Hellenistic period (three tiled roof, one pit). And on Laskos Street, part of a cemetery dating to the fifth century AD (10 amphora burials, 21 pits, four filed roof graves, 11 cremations, and two child burials). Roman walls were discovered to the N.
In the N part of the city, along Heroes of Polytechnion Street. From Pankalos Street to Nikolaidos Street, walls of the Roman and Hellenistic periods. Also five burials of the first quarter of the fifth century AD (three sarcophagi, two cremations and a tiled roof grave). From Nikolaidos Street to Dimitrios Street, part of the ancient road, covering contexts between Geometric to Roman periods. Also buildings of the Roman, Classical, and Archaic periods. At the junction of Dimitros Street and Heroes of Polytechneion Street, a cistern of the Archaic period. From Dimitros Street to Persephone Street, the E wall of a building of the classical period. From Persephone Street to Petraki Street, eleven walls and a Mycenaean hearth. From Petraki Street to Eleftherios Venizelos Street, three burials (two cremations and a sarcophagus of the Classical period, a Hellenistic period enclosure (with mosaic floor) and a well of the Classical period. From Alexandri Street to Sotirios Street, part of the ancient road oriented EW and dating between the seventh and fourth centuries BC. From Solon Street to Kordatos Street, a section of early Hellenistic road, and various cremation and pit graves. The roads identified are from the Archaic period to the third century BC. From Korados Street to Arkadios Street, another part of the Hellenistic road, passing the cemetery of the fourth century BC (four tiled roof graves, two cists, a sarcophagus). And west of Arkadios Street, an agricultural site of the Hellenistic period.
And in the N section of the city. Parts of Ethnikis Antistaseos Street were investigated, yielding sections of road and wall foundations of classical times, and also pits for the Early Helladic period. To the E, Hellenstic period walls, and even further east a Roman ossuary and walls. Even further E, Hellenistic roads were located, and walls from a building dating to the fifth century BC. At the furthest point E of the road, another section of the ancient road was found, dating to the fourth century BC. On I. Agathos Street, walls and pipes were found, belonging to a post-Roman agricultural facility. There were also walls of the Classical period, and a Mycenaean cist grave, the southern part of which had been destroyed by fire in the Geometric period. Sections of Roman and Hellenistic period walls were found, as well as parts of the Roman road and an Archaic well. South of the railway tracks, there were sections of buildings dating to the Roman, late Classical, and early Hellenistic and Archaic periods. Most dated to the first half of the fifth century BC. On Kougioumtzoglou Street another section of the ancient road was found, and pottery of the Hellenistic period. On Dimitrious Street, walls of the Archaic period, and a road section of the Classical and Hellenistic periods. Further down, an Archaic period wall was found, and three burials of the early Archaic and Late Geometric period. On Hatzidakis Street, walls of a Hellenistic building, destroyed in Roman times. Also three cremations and two amphora graves of the Archaic period. Two wells and a clay pipe of the Roman period were found, along with four graves of the Late Geometric period. On Skorda Street, part of the ancient road. 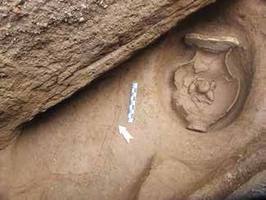 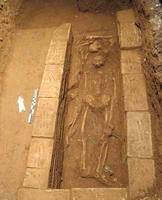