Toponym
Megara
Linked Record
2012
Report
Megara. German road and unnamed street, O.T. 394. Panagiota Avgerinou (Γ’ ΕΠΚΑ) reports on discoveries made during excavation for the construction of a new house.
20 graves were excavated, dating to the archaic and classical periods, including six cists, eight sarcophagi, one tiled roof grave, two pits, two amphora burials, and one burial deposit. Three graves date to the fourth century BC, and one to the first half of the third century BC. All sarcophagi contained multiple burials. Apart from the amphora burials, all individuals were adults, and oriented EW with the deceased in supine position. Most of the graves were undisturbed, with grave goods including pottery, jewelry, silver obols, and marine shells. Some iron nails were also found in grave 10.
A section of the ancient road was discovered, dating to the Late Roman period, oriented NW and 2.30m in length. The surface comprised mainly gravel and pebbles. There are indications that this road overlays an earlier period road.
Eleven walls were also discovered that are from buildings of the archaic period. One wall (8) was thought to be part of a building enclosure, related to the use of graves 6, 7, 8, 9, and 4 (sarcophagi, dating between the sixth and fourth centuries BC). Walls 5, 6, 7 and 11 are thought to belong to a building, destroyed during the construction of the burial area. ‘Room 1’ (defined by these walls) contained the two child amphora burials (fifth century BC), and it is possible that the walls were used to form a simple burial enclosure in the fifth and fourth centuries BC.
Three wells were discovered, one in the E, one in the centre, and one in the W of the plot. These were used in alter periods as refuse pits, and contain pottery of the late Archaic and Classical periods. A female figure from the first half of the fifth century BC was also found in well 1, and a number of slag pieces. Well 2 contained pottery of the Classical and Hellenistic periods. Most of the vessels are amphoras and oinochoes.
E of the precinct wall was a small pit used for fire. Pottery from the embankments is Late Geometric and Early Archaic. Small ceramic vessels and fragments of figures were found near the wall. 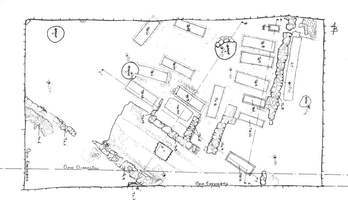 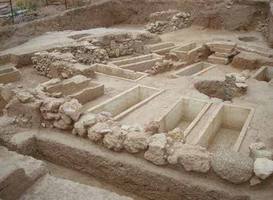 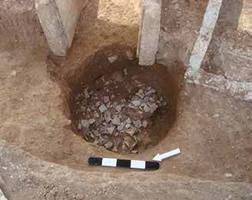