Toponym
Megara
Linked Record
2012
Report
Megara. Area of Agios Ioannis Chorevtara, O.T. 225, 6th primary school. Panagiota Avgerinou (Γ’ ΕΠΚΑ) reports on discoveries made during excavation for the construction of a new Kindergarten building.
18 cist graves were discovered, of which five were completely destroyed. There were also four sarcophagi, one tiled-roof grave, three pit burials and eight burial deposits. Eight of these graves were dated to the Hellenistic period. Most of the graves were in two clusters, demarcated by a cemetery wall.
First cluster consists of twelve graves from the second half of the second century BC.  All were looted, and eight damaged, and all oriented EW. Graves 6 through 12 all belonged to the same stratum.
The second cluster contained graves 25 through 28 and 20. Pottery is from the fifth and sixth centuries AD.
The burial enclosure was demarcated by three walls, made from porphyry stone. Three separate sections (wall 2, wall 3 and wall 4) were preserved, respectively of length 6.17m, 4.37m and 3.58m. In the central part of the wall there were four cist graves (16-19), dating to the fifth and fourth centuries BC. 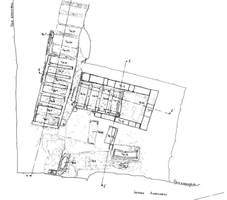 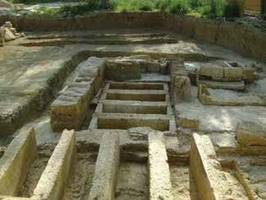 Fig. 2/ View of the excavation from E