Toponym
Eleusis, Elefsis, Elefsina, Lepsina
Linked Record
2012
Report
Eleusis, wastewater treatment works. Kalliopi Papaggeli and Chrysanthi Tzavali (Γ’ ΕΠΚΑ) report on discoveries made during the laying of the new wastewater network throughout the town.
In the S part of the town, structures of the Hellenistic and Roman periods were found. Structures were either related to domestic structures, or cisterns. At Bouboulina Street, a Roman pipe was found that ran from the sanctuary in a SE direction towards the sea.
Four wells were found around the Sacred Way, one Roman burial monument, walls of the Roman period, part of the Classical period Sacred way, and Geometric period graves, as well as two wells and a pipe of the Roman period, and remains of Geometric period domestic structures.
An aqueduct was found of the Hadrianic period, including buildings of the Roman and Hellenistic periods, and prehistoric burials. Walls and foundations of the Classical period were found nearby.
Finally, near Ethnikis Antistaseos Street, there was a Classical period wall around which there were signs of Early Helladic occupation. 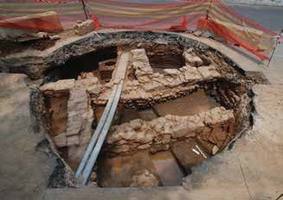 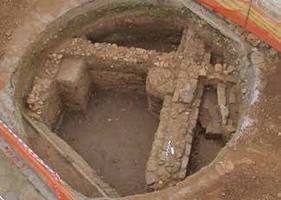