Plaka, building owned by Ministry of Culture at 2-4 Polygnotos Street - 2013

Toponym
Athens Centre (Plaka, Monastiraki), Athènes Centre
Linked Record
2013
Report
Plaka, building owned by Ministry of Culture at 2-4 Polygnotos Street. Raina Pouli (1st EBA) reports on discoveries made during the maintenance and restoration of this building. A storage area was found with 22 pithoi arranged along the walls of the building and built into a bench-like structure made of stone and covered in plaster. The A’ ΕΠΚΑ conducted a rescue excavation on the area including pithoi 1 through 14; the other vessels were investigated by the 1st EBA.
All pithoi were found uncovered, and contained debris from the 20th century (perhaps relating to the repairs of the building in 1972). They contained pottery (mainly modern, with a few older sherds), glass and iron pieces and buckles, two coins, an unglazed vessel, and an almost complete painted pitcher of a modern date.
Based on the shape, decoration style (glazed or unglazed) and the types of clay used, the pithoi can be classified in three groups. The pithoi were made in a much earlier period than their contents, and need further study. It is possible that they are from a pre-independence period, similar to the building in which they were found. But there seem to be at least two phases of pithoi (based on level of use and arrangement): pithoi in the NE section date differently to those in the SW. 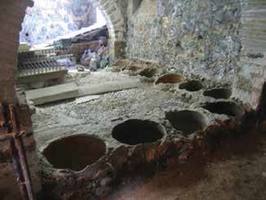 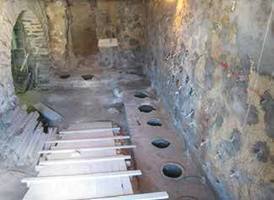