Toponym
Aigion, Vostitsa
Linked Record
2008
Report
Aigion, 14 Kolokotroni Street (property of D. Giannopoulou). Andreas Vordos (ΣΤ’ΕΠΚΑ) reports on the discovery of antiquities which point to uninterrupted use of the area from the prehistoric up until the Roman period. The upper sediment layers contained architectural remains of the Roman period, along with a cluster of five Christian graves. A bronze coin was found in the mouth of one of the bodies. Deeper layers contained mainly of pottery of mixed periods including Mycenaean and Hellenistic, along with fragments of figurines from the former. In the deepest layer was a circular pit which had been cut into a layer containing large quantities of Mycenaean and Geometric pottery. The pit was filled with Geometric pottery sherds, along with rubble, bones and horns of large animals (Fig. 1). 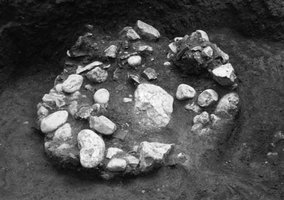