Kavos: work on the Special Deposit South was completed, with the stratigraphic study and removal of a number of baulks. The excavation of 3 outlying 4m x 4m squares confirmed that the extremities of the deposit had been reached. A sample of 20% of all excavated soil was again water sieved, further confirming the absence of human remains or workshop debris.
Immediately S, in the small caves and cavities below the Special Deposit South, the area of trench A again yielded traces of human bone. Excavation in the Middle Area, between the Special Deposits South and North, revealed some simple walls of local metamorphosed limestone, but very little accompanying cultural material. Contrary to earlier indications, no evidence for ECyc settlement was discovered in the Middle Area of the Kavos site.

Dhaskalio: survey of the islet was completed, along with a catalogue of all visible surface features on Dhaskalio (numbering 146) and at Kavos (42) (Figs 1,2). This was aided by ground-controlled helicopter photography (Department of Rural Survey and Engineering, Aristotelian University, Thessaloniki), and kite and pole photography (C. Gaston). Photomosaic coverage for both Dhaskalio and Kavos was achieved, and on this basis orthophotographic coverage (and a digital terrain model) at a scale of 1:500 will soon be available.
Investigation of the massive terrace wall identified in 2007 was completed. Excavation focused on the summit area where a substantial structure, ca. 16m l. and running N-S along the spine of the summit, was unearthed (Fig. 3). This is the most substantial building yet found in an ECyc settlement. A hoard of 3 copper or bronze axes was found in a small room at the S end (Fig. 4): a solid flat axe or chisel, 0.222m l. and weighing 351g; an axe-adze, 0.196m l.and weighing 637g; and a shaft-hole axe, 0.101m l. and weighing 139g. Immediately S of this main building on the summit was a roughly circular enclosure, di. 2.4m, with an opening to the S. During its later use, this was the locus of deposition of more than 300 rounded limestone beach pebbles. These did not come from the nearby beach at Dhaskalio Kavos, but were probably collected from Ano Kouphonisi.
Study of the pottery indicates that settlement at Dhaskalio and the beginning of deposition in the Special Deposit South should both be dated to the early phase of the Keros-Syros culture. Pending the results of C14 analysis, the chronology established at Markiani on Amorgos places this phase (Dhaskalio phase A) at ca. 2800−2500 BC. The buildings on the summit were begun during this phase and reconstructed during phase B, which, on the basis of imports of the so-called ‘Kastri Group’, dates to ca. 2500−2200 BC. The later use and abandonment of these buildings falls in phase C, which, on the basis of imports which include sherds of the Phylakopi I culture, dates late in the ECyc, provisionally ca. 2200−2000/1900 BC.
The settlement at Dhaskalio is currently the largest known from the ECyc period at ca. 7,000m2. It housed a wide range of activities, including the production of obsidian tools (studied by T. Carter and M. Milic). Examination of the ground-stone tools (Y. Rowan) indicates a rather restricted range. Figurine finds include several marble examples (and perhaps one lead) of what may now be considered the Dhaskalio variety of the schematic figurines of the Keros-Syros period. These are of fine white marble, and in some cases are complete. Yet, so far, Dhaskalio has produced no examples of the folded-arm figurines so common (but always broken) in the Special Deposit South at Kavos.
Study continues of metallurgical activity (M. Georgakopoulou), the sources of imported pottery (J. Hilditch) and the sources of the marble for the marble objects found (Y. Maniatis with D. Tambakopoulos). The use of the various structures is being examined via soil micromorphology (C. French with S. Taylor) and the study of phytoliths (L. Zorzos). Analysis of plant remains (E. Margariti) has revealed cereals, vine and olive: study of animal bones and marine shells is pending. Finally, work continues on the human remains from trench A on Kavos and from a deposit containing burnt human bone on Dhaskalio (I. Moutafi). 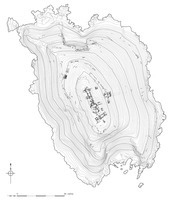 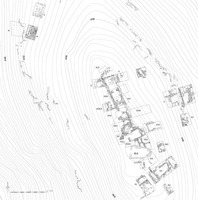 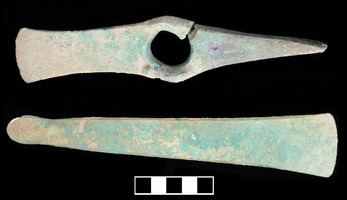