Key-words
Agricultural facility - Tomb - Tools/weapons - Metal
Type of Operation
Excavation - Rescue excavation
Institution
Toponym
Toskai
Linked Record
2008
Report
Toskes. Vasileios Argyropoulos (ΣΤ’ΕΠΚΑ) reports on new discoveries at farmstead A. Investigations were concentrated in the northern area of the complex where a number of new rooms were located. Towards the west a new farmstead complex (B) was identified, although the relationship between the two is unclear.
Approximately 100 m. to the east of farmstead A were the foundation walls of another building which may also have been a farmstead (Γ) (Fig. 1). It consisted of three rooms and was 23.7 m. in length and 6.0 m. in width. The walls were made of conglomerate, limestone, mud and tiles and were dated to the Hellenistic period. Also found in the vicinity was Medieval pottery and recent tiles.
A cist grave and pithos burial were discovered at the area of Souvaliotika, to the north-west of the church of Agioi Theodoroi (Fig. 2). The cist grave was aligned on an E-W axis and was slightly trapezoidal in shape. It was built of roughly worked stones and conglomerate and had interior dimensions of (3.15x1.40 m.). Its height was only partially preserved and it contained multiple inhumations of different periods. All were very disturbed, although it would appear as though the bodies were placed with the head facing east. The first burial was dated to the Mycenaean period based on the presence of a rounded alabastron (Fig. 3) and another spherical vase. Other finds included Geometric to Early Archaic pottery, a bronze fibula (Fig. 4), a bi-conical spindle-whorl of the same period and a glass bead. During a subsequent phase, the eastern part of the wall was destroyed by a pithos burial (1.20x1.30 m.) The skeleton was not preserved and there were no grave goods.
Two Classical graves were identified in the course of public works located to the east of the Patras to Tripoli motorway. They included a pithos and pit burial and both were severely damaged. The pithos did not contain any bones while the pit burial was covered by broken limestone slabs. The body had been placed in an extended position but was also severely damaged. Grave goods included a bronze strigil, a complete stamnos-pyxis (Fig. 5) and a skyphidio, along with fragments of another pyxis and a pot.
Parts of a retaining wall built with conglomerate and other local stone was identified, preserved to a height of two courses of blocks. 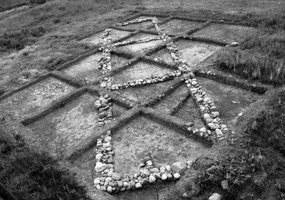 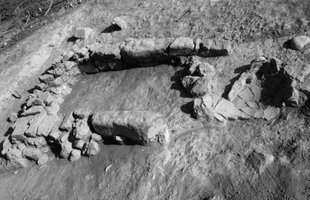 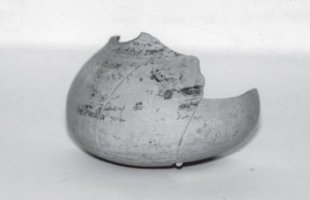 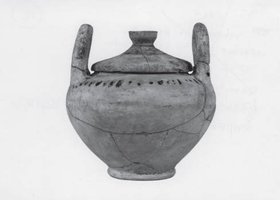