Toponym
Drepanon
Linked Record
2008
Report
Drepano, Alonia (property of E. Chalkidi). Artemis Maniaki (ΣΤ’ΕΠΚΑ) reports on the discovery of part of an ancient cemetery with at least three different phases of use (Fig. 1). In the north-eastern part of the cemetery were three cist graves aligned on a NE-SW axis and dated to the Late Classical period. To the south and south-east were nine tile covered graves of unknown age and in the south-west were four burial pithoi from the Geometric period (Fig. 2).
Cist grave 1 (2.13x0.53x2.13 m.) consisted of two poros slabs placed along each of the long sides and one along the narrow, with four Corinthian pan tiles used as a cover. The body was placed directly on the floor of the grave and was only partially preserved. Grave goods included a pointed amphoriskos from the Bulas group, a single handled black-glazed skyphos of the Classical period, a lekythio from the Bulas group, other lekythia (Fig. 3), a bronze earing, a bronze mirror and an obol coin of the city of Tanagra dated to around 387-374 BC.
Cist grave 2 (2.20×0.60x0.83 m.) consisted of three Corinthian pan tiles placed along each of the long sides and one along the narrow, with three used for the cover. The floor was also tiled and the body had been placed on its side with contracted knees. The grave goods included a lekythos and a fragment of a bronze arched fibula.
Cist grave 3 (1.65×0.50x0.90 m.) consisted of three Corinthian pan tiles placed along the long sides and three for cover. The narrow sides were not tiled. The body had been laid in the extended position and grave goods included a squat lekythos, a Classical lamp and a small gold-painted clay object, possibly an earring.
The four burial pithoi were placed horizontally. In two cases, pebbles had placed around the edge of the vessel. In three of the four pithoi, a roughly circular disc had been used to seal the stomion (Fig. 4). They were aligned on an E-W axis and were between 1-2.50 m. in height. Grave goods included an iron knife, a Geometric krater skyphos, a bronze phiale, a bronze ring, an iron pin, parts of an eight-shaped fibula, a skyphos-kylix, a kotyle dated to the 7th c. BC and a jug (Fig. 5).
Author
Michael Loy
Bibliographic reference(s)
ADelt 64 (2009) Chr., 419-422 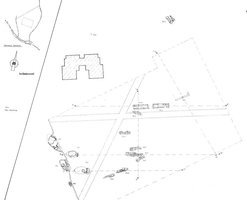 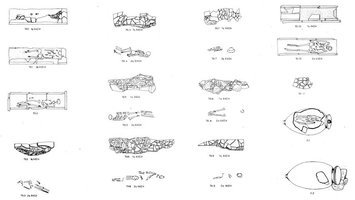 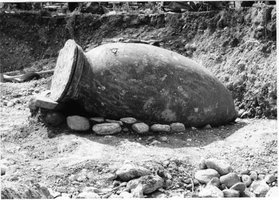 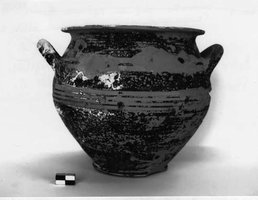