Toponym
Akrata
Linked Record
2007
Report
Municipality of Akratas, Kapsakou, N. Solioti Street (property of E. and A. Spanou). Lambrini Papakosta (ΣΤ’ΕΠΚΑ) reports on the discovery of two buildings aligned on a N-S axis (Figs. 1,2).
Building I was 11 m. long by 5.4 m. wide and was built with large blocks (1.0x0.7x0.40 m.), with repairs and modifications in some areas using smaller rubble and mud. Large stone blocks and spolia were used to construct the foundation. The building was divided into two rooms, number IV in the south and V in the north. Initially, the two rooms were connected by a door, but at some point this was sealed with rubble, tile fragments and mud. Both rooms were internally lined with plaster on the walls and floor, while the entrances were located along their western sides. During a later phase, the building was extended towards the east by adding a further four rooms.
Building II was 14 m. long by 4.30 m. wide and was built with rubble and mud. It consisted of two rooms, VI and VII, the former with an entrance in the east and divided internally into smaller spaces. The outline of Room VII was only partially preserved. Close to the exterior north-eastern corner was a rectangular cistern (2.06x1.06 m.), internally lined with hydraulic plaster and with small stones protruding from its eastern and southern sides which were used as steps to access the interior for cleaning. The floor sloped downwards towards a square-shaped depression, within which was a pot with a hole in its centre. In the northern side of the cistern was a pipe through which liquid would have entered from a wine press (linos), which was probably located in the northern part of the area investigated. Attached to the southern wall of the cistern was a square construction (0.75×1.15×0.24 m.), which was probably a ypolinio. 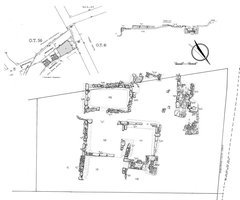 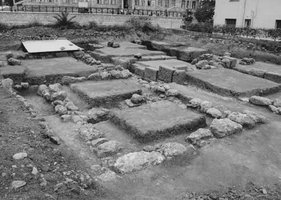 Fig. 2/ General view of the excavation from the south-west