Toponym
Toskai
Linked Record
2007
Report
Toskes. Vasileios Argyropoulos (ΣΤ’ ΕΠΚΑ) reports on the discovery of a farmstead consisting of nine rooms with walls made of large cobbles and rubble (Fig. 1). Some contained substantial quantities of pottery including cooking pots, lekanides, skyphoi, amphorae and loom-weights. In the south of the complex was an extended destruction layer consisting of Laconian tiles. Based on the finds, the farmstead was attributed to the 4th to early 3rd centuries BC. To the west of the complex on top of a hill was a cluster of four cist graves made of limestone slabs. These were aligned on an E-W axis and all but one were poorly preserved. Their chronology is uncertain. 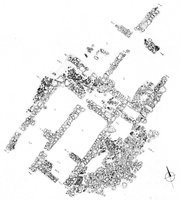