Toponym
Elis, Ilis, Palaiopolis
Linked Record
200620072008
Report
Archaeological site of Elis. Olympia Vikatou reports on further excavations at the archaeological site of ancient Elis, with work on building N, three bath complexes, the House of the Muses and the residential area between the first and second main roads of the old town.
Building N is located in the central part of the ancient agora, about 100 m. away from the theatre. Excavated during the early 1900s by the Austrian Archaeological Institute, it was square in shape with an interior colonnaded courtyard and four rooms, one in each corner. The recent excavations were focused on two rooms, one in the south-east (5.65×5.45 m.) and the other in the north-east (5.85×5.75 m.) (Fig. 1). Parts of roughly made walls were also found, along with 21 tile covered graves. The majority were clustered close to the south-western part of building N and were of rough construction and lacked grave goods. The bodies had been placed in an extended position and aligned on an E-W axis. Additional finds included sherds of coarse and black-glazed pottery dated mainly to the Hellenistic and Roman periods, as well as parts of the building’s sima sculptures, bronze and iron nails, tesserae, other bronze objects, coins and the marble torso of the goddess Athena.
The Roman baths were made up of two areas, building A’ and the gymnasium baths. Investigations in building A’ were concentrated in the western and southern parts of the complex (Figs. 2, 3). Along the western side of the bath was the foundation of an older building made of poros blocks and aligned on a N-S axis. To the west was a group of partially preserved sewage pipes attributed to the Roman phase of the building. Their side walls had been built using rubble, bricks, Corinthian and Laconian tile fragments and hydraulic plaster (kourasani). Excavations to the west and south of the area with the hypocausts, revealed exterior walls built using the isodomon system. In the southern part of the building were three burials, probably attributed to the Early Christian period. The bodies had been placed directly on the soil in an extended position with arms folded and aligned on an E-W axis. No grave goods were found. Additional finds included large quantities of Hellenistic and Roman pottery, loom-weights, coins, fragments of sima and shells of murex brandaris and murex trunculus linne. Excavations at the gymnasium baths were concentrated in the east and south-east of the building, producing foundations and pebble floors (Fig. 4).
In Building Rho (south-eastern part of sector H), excavations located a further five rooms, along with the four discovered in previous years. These were of different sizes while in room 2 was part of a floor paved with marble slabs resting on white mortar. In room 1 were hypocausts and a cistern (2.30×1.90 m.) lined with plaster. Based on these structures, the excavator identified the building as a bath. Additional finds included a clay stamp, pottery, architectural remains, glass vases, figurines, bronze objects, coins and bone artefacts including a fragment of an abraded bone medallion (depicting a gorgoneion?).
Excavations were carried out in the southern and northern parts of the old town as well as in building ΣΤ/Α. In the southern part, investigations were focused on the junction of streets I and II where a large destruction layer containing building remains, roof tiles and bricks was found. A similar deposit was also found to the north to building ΣΤ. Also excavated was the northern retaining wall of street I, made of bricks and spolia and with an excavated length and width of 10.40 m. and 0.60 m. respectively. The width of street I at the junction with street II was 3.50 m.
The western part of building ΣΤ/Α was located in the northern and western parts of the area defined by the three major roads of the town. It was defined to the north by building ΣΤ, to the west by the road-side colonnade of street II and to the south by the western part of street I. Its excavated dimensions were 28.5 m. by 10.0 m. and it was crossed by wall 2, on either side of which were nine interior rooms (Figs. 5, 6). In two of these (2 and 6) were found storage pithoi. All of the rooms were covered by a destruction layer, while additional finds included Roman and Late Roman/Early Christian pottery, bronze coins and a few other bronze objects including two fish hooks and part of a scale. In addition, parts of a mosaic were found on the eastern wall of room 3. The excavator has suggested commercial and industrial activities were carried out in the building.
In the northern part of the town was building Z, located adjacent to street III and opposite building Γ. Its walls were roughly made using spolia and 13 rooms investigated, located in its central and north-eastern parts (Figs. 7, 8). These produced many finds including pottery, architectural remains, animal bones, bronze objects, figurines, glass vases, nails, coins and loom-weights. A commercial character was also attributed to this building. To the south of the building was a thick destruction layer consisting of rubble, bricks and broken tiles, architectural remains and sherds of storage pithoi. 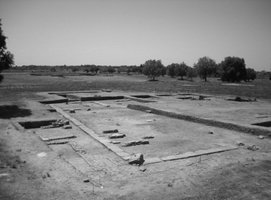 Fig. 1/ Building N from the north-east 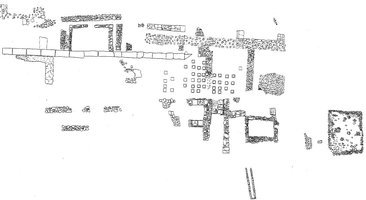 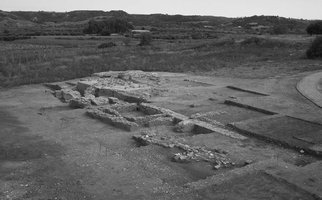 Fig. 3/ General view of building A from the south-west 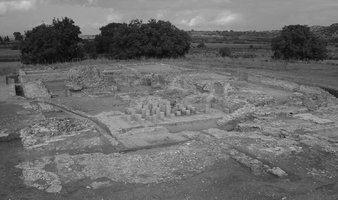 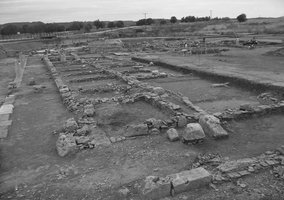 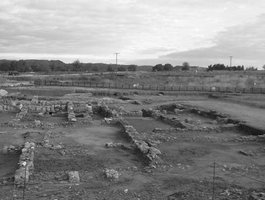