Toponym
Amaliada, Amalias
Linked Record
2007
Report
Municipality of Amaliados, Agios Ilias, Panagoula. Christos Matzanas (Ζ’ ΕΠΚΑ) reports on investigations carried out after a number of pieces of pottery and other finds (Fig. 4) were discovered and handed in to the archaeological authorities (Figs. 1, 2). The finds derived from the area of Panagoula which became accessible after a fall in water level in the artificial lake of the Peneios River. Also revealed were the remains of a traditional water-mill (Fig. 3).
Amongst the finds was a burial pithos of 1.90 m. in length, located next to a circular clay construction, probably a kiln. Also found was a concentration of 45 sherds belonging to a large red-figured pot detailing a funeral scene. The pot derived from an area where two hut-graves and one pit burial were excavated, part of a larger Christian cemetery.
The presence of a marble pivot stone led to the discovery of an apsidal building (10.0x4.50 m.) aligned on an E-W axis (Fig. 5). The building was identified as a small church, preserved only as foundations, although its superstructure would have been built with bricks, tiles and stones. Next to the church were architectural remains belonging to two ancient buildings possibly dated to the Byzantine period (Fig. 6), while a few meters to the west of these was collected prehistoric pottery.
Near to the traditional water-mill was a burial mound on top of which was a large sandstone slab. Artefacts collected in the area included pottery dated to the Neolithic or Bronze Age as well as obsidian and flint chipped stone artefacts. Also found in the same area was a rich concentration of Classical and Hellenistic pottery, along with tiles, the foundation of a rectangular building and other scattered architectural remains. 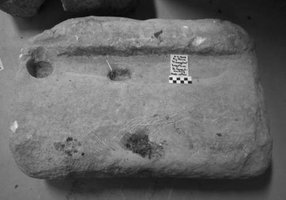 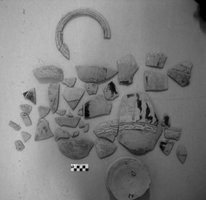 Fig. 3/ Traditional watermill in the area from the south-west 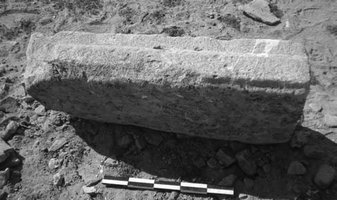 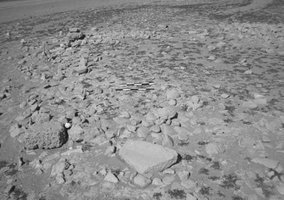