Toponym
Oleni, Olena
Linked Record
2006
Report
Municipality of Oleni, Arvaniti, Samikon. Panagiotis Moutzouridis and Konstantinos Nikolentzos (Z’ EPKA) report on the discovery of building remains on a hilly plateau to the west of the cemetery of Samikon, in an area known as Kleidi (Fig. 1). Two walls with two rows each of unworked blocks were found, along with abundant pottery dated mainly to the Middle and Late Bronze Age as well as the Archaic, Hellenistic and Roman periods. The pottery was handmade and consisted mainly of storage pithoi and amphorae, along with drinking vessels including cups, kantharos and kylikes (Fig. 2). 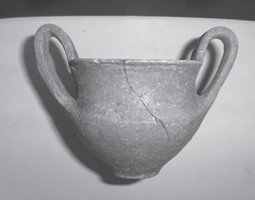