Toponym
Strefion
Linked Record
2006
Report
Olympia, Strefi. Konstantinos Nikoletzos (Z’ EPKA) reports on the discovery of a Late Helladic IIIA2-B2 cemetery including 18 graves of four different types. The first were chamber tombs, circular or rectangular in plan along with one in which the sides were rounded off, carved into the bedrock (Figs. 1, 2, 3). The pits within the chamber were also carved into the bedrock floor and were aligned along the same axis as the tomb itself. A stomion of reduced width compared to the dromos was absent and the chambers were blocked by rubble walls. The dromoi varied from between 2.95 and 6.27 m. in length and had burial niches carved out along their sides.
The second set were pit graves of 2-3 m. diameter, elliptical in shape and dug into the bedrock, with multiple internal compartments defined by rubble walls made of river pebbles and sandstone slabs. Occasionally the rubble walls included pots, while in some cases they were enlarged to cover the individual graves.
The third type were simple pits, while the fourth included hybrid (Fig. 4) or unfinished tombs with a dromos but no chamber.
Twenty-nine complete or almost complete vessels were collected, including alabastra, along with piriform jars and cups. Also present were shaving implements and beads made from semi-precious stones or glass. There was a single zoomorphic figurine, probably associated with a child burial (Fig. 5). All graves apart from one (E-W) were aligned on a N-S axis and were dug into the soft sandy bedrock typical of the region. Because of this, all but three of the chamber tombs had collapsed roofs. 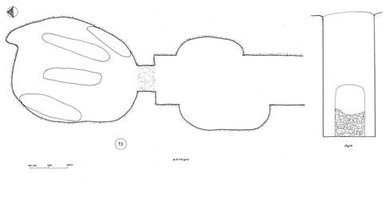 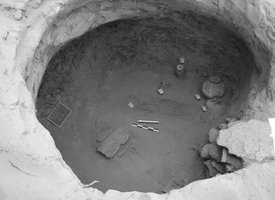 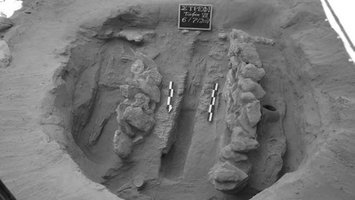 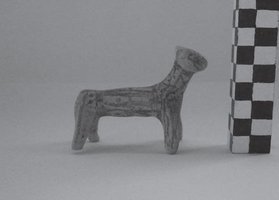