Toponym
Archaia Olympia
Linked Record
2006
Report
Olympia, Souria. Georgia Chatzi-Spiliopoulou (Z’ EPKA) reports on the discovery of architectural remains, probably of a private farmstead dated to the Late Classical period, based on tile fragments and pottery sherds found in the joints between the rubble walls (Fig. 1). These had an average thickness of 0.50 m. and were constructed with reused materials, probably from an earlier large public building. Two walls of the building included large squared blocks (0.50×0.80×0.50 m.) of shelly rock. In places, the foundation was preserved up to the height of four courses of blocks. There were at least four internal rooms, filled with material from the structure’s destruction. The rooms were either square or rectangular, while two (rooms 4 and 2) had preserved entrances on their eastern and southern sides respectively, although thresholds and other door elements were not present. Outside but close to room 2 was a limestone structure which probably served as a storage facility. The building had a Laconian roof system, based on the numerous pan and cover tiles that were located. Other finds included kantharoi, kylikes and lamps made of black-glazed and unglazed pottery. There were also nine bronze coins of the Classical period and other bronze objects including a stud, plate and a fragment of a chisel. 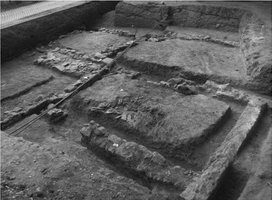