Toponym
Phigalie, Bassae, Bassai, Temple of Apollon Epikourios
Linked Record
2006
Report
Ancient Phigaleia, plot of P. Barkevics and S. Cardus. Georgia Chatzi-Spiliopoulou (Z’ EPKA) reports on the discovery of architectural remains in the eastern part of the ancient walled city. In the vicinity of an fountain excavated in the late 1920s by Anastasios Orlandos, was discovered a built, circular cistern for the collection of water, of about 1.50 m. high and 2.33-3.39 m. in diameter. It was surrounded by a rubble wall and was probably free standing in the open air. It was lined internally with a two-layer hydraulic concrete, the earlier being whitish in colour and the later reddish (Fig. 1). In the 4th-3rd centuries B.C., the cistern changed function and was used as a refuse disposal pit, filled with a range of materials including copper and iron artefacts and tools, large quantities of slag, lithic artefacts made of local limestone, fragments of glass, the remnants of meals including bones and land and marine mollusc shells. The cistern also contained sherds from a wide range of vessels for both drinking and liquid storage. There were various sizes of pithoi, skyphoi, kyathoi, lekanides, hydriae and small amphorae. In addition, there were clay figurines, clay lamps, large numbers of loom weights and clay spools. Also found was a clay tile fragment with the inscription ΦΙΑΛΕΩΝ ΔΑ[ΜΟΣ](Figs. 2,3, 4). 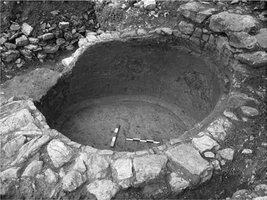 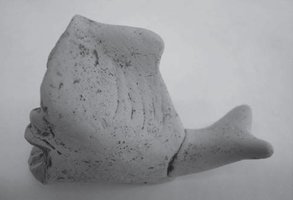 Fig. 2/ Clay fish figurine from the fill of the cistern/pit 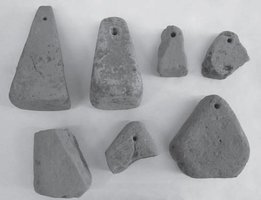 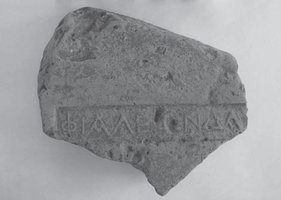 Fig. 4/ Clay tile fragment with inscription from the fill of the cistern/pit