Toponym
Perivola
Linked Record
2006 (1)20062006 (2)20072007 (1)200820182018 (1)20192019 (1)2019 (2)2019 (3)2019 (4)2019 (5)
Report
Ancient Phigaleia, Perivolia. Georgia Chatzi-Spiliopoulou (Z’ EPKA) reports on the discovery of an ancient temple or heroön (building A) of maximum dimensions 9.80x6.50 m (Fig. 1). It consisted of a simple square Doric temple made of local limestone, in which were preserved in situ, remnants of the krepis, the stylobate and a number of parts of the orthostates of the cella. Many other architectural remains belonging to the walls and the entablature were widely scattered around (Figs. 2, 3). The temple was built with large blocks (1-1.20x0.50x0.55 m.) (Fig. 4) and had a gabled roof covered with Corinthian style clay tiles. The entrance (1.42 m. in width) was in the east side. Use of the temple is dated from the end of the 4th to the early 3rd centuries BC, and it was located outside of the walls of the ancient city of Phigaleia. Due to the lack of inscriptions, it is uncertain to which hero or god the monument was dedicated.
To the south-west and attached to the temple were the remains of another Doric monument (building B). Although only partially preserved, its overall dimensions and careful construction suggest that it was an important location. The euthynteria which was 1.10 m. wide is visible as well as the first row of blocks. Two walls, one each in the west and north facing sides are partially preserved, forming an interior room. The presence of Z shaped grooving on two single blocks dates the building to the Hellenistic period.
Another building (Γ’) was also discovered to the east of the temple. It was also built of limestone blocks but is very badly preserved. Finally, a carefully made rubble wall of 16 m. length is thought to have been used as a retaining wall or enclosure for building A (Fig. 5). An open pipeline was discovered which was associated with the buildings discussed above. In good condition, it runs downhill along bedrock in a NW-SE direction for about 110 m., following the cliff edge where it flanks part of the saddle (Fig. 6). It was made of blocks with roundish edges with a carved gully running down the centre of each, forming the channel (Fig. 7). Fifty blocks were found in-situ with many others partially preserved. The largest were about 2.50 m in length and the smallest about 1 m. The pipeline probably carried water but the excavator does not exclude a ritual function. Based on the pottery, the pipe is dated to the Later Classical period. 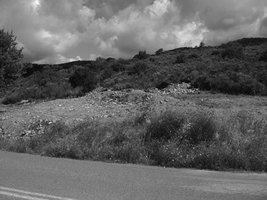 Fig. 1/ Preservation of the temple with asphalt 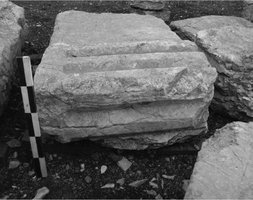 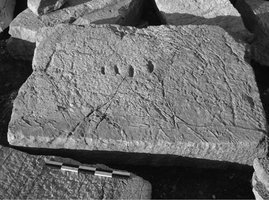 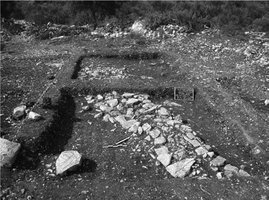 Fig. 5/ Precinct wall located to the north of the temple 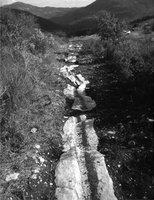