Toponym
Asea, Kandreva
Linked Record
2008
Report
Megalopolitiki Chora, new toll station at Asea. Leonidas Souchleris (ΛΘ’ ΕΠΚΑ) reports on the discovery of a farmstead and two wine-presses (linoi) dated to the late Roman period (3-4th centuries AD) (Fig. 1). The presses were rectangular in shape and aligned on an E-W axis. Both have ypolinio and are internally lined with hydraulic plaster. They were located 85 m. apart, with the northernmost one preserved intact and the southern one almost completely destroyed.
The dimensions of the northern press were 3.60x3.40 m., while the walls were 0.50 m. high. Its floor was set at an angle on the western side where there was a pipe connected which led away the must to the ypolinio. The dimensions of the southern press were 4.20x2.82 m. Its construction was similar to that in the north, while its north-eastern corner was attached to a wall which probably formed part of the enclosure of the farmstead. 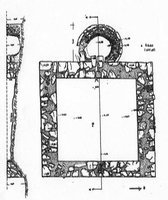